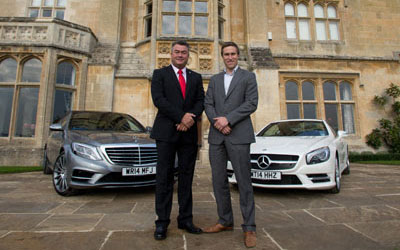 Bath Rugby has announced a partnership German car manufacturer Mercedes-Benz for the 2014/15 season.

Mercedes-Benz of Bath has been named Official Vehicle Supplier for the new campaign as part of an exclusive tie-up that will benefit both the Club and its supporters.

The Peasedown St John Retailer will provide several vehicles for Bath Rugby officials to use and will also supply cars to players through a VIP programme established between the RFU and the motor manufacturer. There will also be special offers available to supporters of the West Country side.

Tarquin McDonald, Managing Director of Bath Rugby commented: “As a company, we want to link up with other strong brands that have both a local and international presence, and Mercedes-Benz is a prime example of this. We have already developed a good relationship with the Bath dealership, and we look forward to continuing that for the benefit of the Club and our supporters over the coming season.”

Tim Sett, Mercedes-Benz of Bath’s Dealer Principal, was delighted that the Retailer was strengthening its links with Bath Rugby by taking its association to a new level.

“Having supported Bath Rugby for almost a decade through the individual shirt sponsorships of players past and present such as Julian Salvi, Olly Barkley, Stephen Donald and George Ford, we are thrilled to have agreed this exclusive arrangement to become Official Vehicle Supplier for the 2014/15 season,” he said.

“Like Mercedes-Benz, Bath Rugby is steeped in history and it’s fantastic for us to not only be involved with the club when they have such ambitious plans both on and off the pitch but also to have the opportunity to provide some special offers to its loyal season ticket holders.”