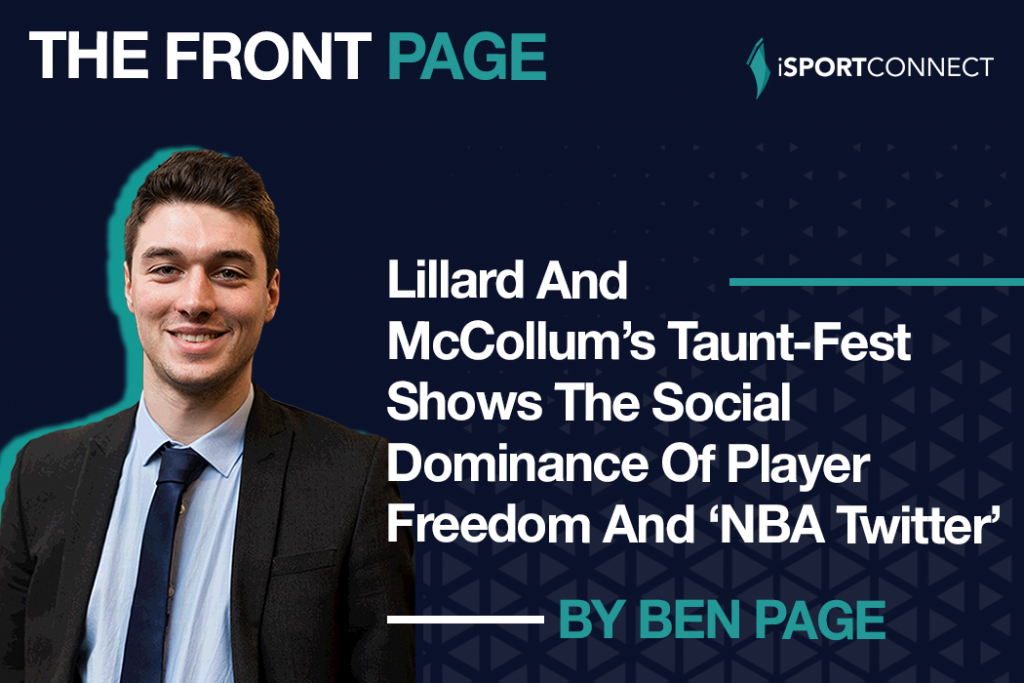 The NBA once again showed it’s social media draw last week, after two of the league’s stars took to Twitter to laugh at the expense of their rivals, it illustrates the greater freedom given to the league’s players in comparison to many others, and why the NBA continues to lead from the front on social.

As the Los Angeles Clippers passed up opportunity after opportunity to get back into their game seven loss to the Denver Nuggets last Tuesday night, the eyes of the viewers likely started to divert to their phones, and for good reason.

The post-game eyeballs were not fixated on the celebrations, interviews and post-match analysis, in ‘NBA Twitter’ there is always something going on and the LA Clippers, title-favourites just a few weeks prior, getting knocked out prematurely by a young Nuggets side did not disappoint.

With Paul George and Patrick Beverley, who have had their fair share of battles with the Trail Blazers and their point guard Damian Lillard, eliminated from contention, Lillard and his Portland co-star CJ McCollum let rip with a barrage of tweets poking fun at their rivals.

“If anything, Lillard and McCollum’s Twitter stat-lines for the night almost overhauled that of George and Beverley’s on the court”

In the space of an hour the two dominated the social media platform, a matter of minutes after the first tweets were sent Twitter was ablaze, the Clippers losing the spark required to set it alight.

If anything, Lillard and McCollum’s Twitter stat-lines for the night almost overhauled that of George and Beverley’s on the court:

There are many teams, players and brands who would give a hell of a lot for that social media interaction.

Head to Instagram the following morning and the majority of posts being shared around the basketball and sporting community is simply screenshots of these tweets, as is often the case with Facebook pages also regurgitating tweets for their own content use.

As a fan this surely has an impact, players are making themselves more relatable to the supporters by engaging in this manner and reacting as they would in a similar situation provides a deeper connection between the two, which can only be a positive and is where the initial benefit of social media came in the early days, a place it would be nice to return to.

But the question sticks as to which other league you would see players so openly making fun of their peers and rivals in?

There are many sports now, a key example being that of football, where the entire attitude to social media and the press is beginning to leave many people disillusioned. Players are rarely allowed, or are even scared, to let their true personality show.

Take the example of highly-talented England international cricketer Jofra Archer, who has been almost vilified at times for his entertaining use of social media and his posts as he plays Call of Duty almost every night, but in reality this will only be widening his fanbase and thus, hopefully, increasing the overall interest in cricket as well as his personal brand.

“There are many sports now, a key example being that of football, where the entire attitude to social media and the press is beginning to leave many people disillusioned”

For the NBA it is the polar opposite, players are allowed to speak their minds openly on almost any issue, something many players in other sports may wish to, yet do not feel comfortable doing.

Take the Oklahoma City Thunder’s Chris Paul opting not to talk about a crucial victory against the Houston Rockets in his post-match interview a few weeks back, instead highlighting more important social injustices going on outside of sport.

The NBA continues to reign supreme on social with this freedom, which in turn garners more attention for the league thanks to their own players. We will see how long it takes for others to empower their players to do the same.