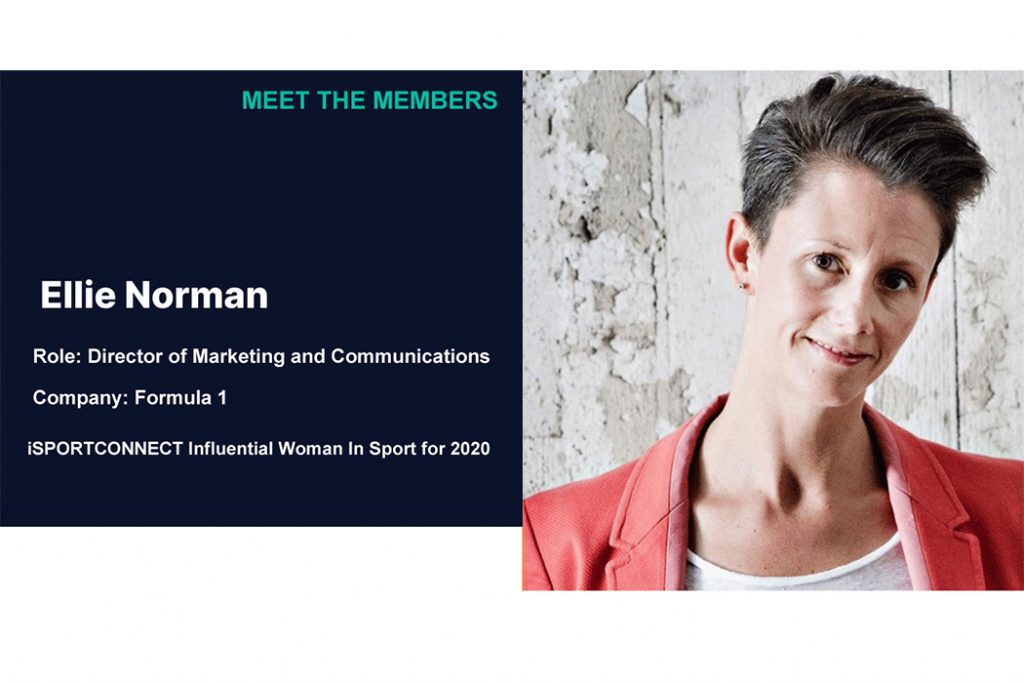 Member Insights: Formula 1 “Can Show It’s Possible To Come Into Motor Racing And Be Successful As A Woman”, F1’s Ellie Norman

Earlier this year Ellie Norman, Director of Marketing and Communications of Formula 1, was named as one of iSportconnect’s Influential Women In Sport For 2020, so iSportconnect spoke to Ellie a few weeks ago, to discuss her journey to F1, diversity within motor racing and opening F1 to a wider audience.

After growing up with a love for driving and motorsport, Ellie Norman has progressed to what surely must be a dream job, working as Director of Marketing and Communications at Formula 1.

Upon finishing school, Ellie opted to get a job with an advertising agent, something she describes as a ‘bold decision’, but five years in the role brought her ‘fantastic learning’ working with Honda as a client.

“I found it fascinating working with Honda as a brand and learning their philosophy. Honda then asked if I would do a six-month secondment for them, which ended up being eight years working for them across Europe, the Middle East, Africa and Russia,” Norman says.

“I’ve had my eyes opened in a great way coming into F1 from the high calibre of female leaders that exist within the business and seeing the talented women that are working in and around the sphere of F1 teams.”

She then moved across to Virgin Media in 2012 to learn how the entertainment and telco industry worked,  adding that “It was great to work with a challenger brand in the sector. It’s a household name but from a category and investment perspective certainly a challenger against the likes of Sky and BT Sport.”

In April 2017, five years into her role with Virgin Media she received a phone call to have a coffee with Sean Bratches, “My ears pricked up when I heard F1”, Ellie states, “With my most recent experience having been in the entertainment space after my automotive time it felt as if I was able to bring those two worlds together and combine that with my passion.”

So did you have a specific goal to work in sport and racing or was it a happy coincidence?

I’ve definitely fallen into it, I’d had it as a hobby before it became my job as I have a track car and enjoy track days, so I can fulfil that passion. My other passion was really understanding how humans responds to brands, how you build brands, awareness in the marketplace, customer loyalty and growing value long term through the power of marketing.

That’s always been my career to date through my time at Honda and Virgin and it’s great to now have the world’s colliding, the one casualty has been I definitely don’t have enough time to do as many track days as I would like to! But I’m so fortunate to see the pinnacle of racing up close and personal.

How ironic is that!

I did get to go in a two seater F1 car in Austin which was phenomenal and I remember coming out of the car thinking ‘that was absolutely mind blowing’, the forces as you corner and are braking. It’s on a whole other level. The lap time was 20 seconds slower than in a race I think but it just shows how phenomenally fit they are to compete at that level, my track day fun would be like going to Waitrose for them!

Many people on the outside see motor racing as very male dominated, what’s the reality?

I’d definitely say the perception of many is not the reality. I’ve had my eyes opened in a great way coming into F1 from the high calibre of female leaders that exist within the business and seeing the talented women that are working in and around the sphere of F1 teams. So I really think we have a collective responsibility to change the perception that’s out there and we took the decision to make some visible changes to illustrate the talented women operating behind the scenes to drive the sport forward.

“We can support and elevate other series to raise awareness of equal opportunities and show it’s just as possible to come into motor racing and be successful as a woman.”

We removed grid girls in 2018 and that’s provided an opportunity through our broadcast to elevate women already here. It goes throughout, from my world to analysts, strategists, the talent is there, so if we can highlight that for our 1.9 billion cumulative audience during the season that’s important. Part of that audience are young boys and girls who are just starting to subliminally understand this is a sport with equal opportunity and it’s about the talent and drive you have to get their yourself.

How important is the plan to incorporate the women’s racing competition W Series into a couple of F1 race weekends?

It’s really important, we’re the pinnacle of motor racing and for young people who aspire to be in motorsport you ask anyone what they’d like to drive in, it’s Formula 1. Through the reach of our platform, particularly social media, we can support and elevate other series to raise awareness of equal opportunities and show it’s just as possible to come into motor racing and be successful as a woman.

There are a number of initiatives that exist, such as the FIA Women in Motorsport Commission, there’s a lot of great work taking place there by Michèle Mouton, there’s Susie Wolff and her ‘Dare to Be Different’ initiative. As to how we increase things at a global level, it’s important for us at Formula 1 that we continue to drive diversity and inclusion within the sport.

Can this then also be used to help grow and engage a greater female audience for Formula 1?

Well we have our brand tracking model and when you look at our audience and who is engaged, whether doing fantasy teams or following the social media you’re looking at a 40/60 split.

Depending on which point you look at that goes up to 44% women, so I’d say things are starting to move along in terms of growing that fanbase to address the perceived gender imbalance because there is already an engaged female audience there who love to follow F1. The question is just how can we encourage some of that female audience to take part and have careers in motorsport.

40-44%, that’s probably much higher than many in the general public would imagine?

I think one of the things that really contributes to that is that F1 takes place over three days, so there’s a lot of great action on track but it also provides a much larger entertainment piece. Often fan research at races shows there’s something for the entire family, the ability to not only watch action on the track but to take part in a number of activations such as fan zones, fan forums with drivers and concerts, all of that contributes I think to the numbers we’re seeing.

Overall huge interest has been shown for women’s sport with the success of the recent ICC Women’s T20 World Cup in Australia and last summer’s FIFA Women’s World Cup, it seems to be gaining momentum?

It’s been brilliant to see the increase and the passion that’s exhibited, because for the most part that’s not been celebrated. Watching women’s sport is brilliant, the incredible athletes, fascinating stories and characters.

One of my fondest memories from the Women’s World Cup is listening to kids talking about going home from school to watch it. So what I think is great is that at that young age they’re not differentiating, it’s just about top-notch, full-on sport. It’s great to see the increase in sponsorship and the coverage that’s also being given now.

Should more be done to not just illustrate women playing sport as role models, but also those in executive positions such as yourself?

There are so many roles out there. I think what we’re seeing more and more in business is recognition and understanding the power of diverse thought. You look at a number of different businesses who have a mix of backgrounds working together at executive levels and they’re companies that have robust strategic thinking and are making great decisions, because there’s a real challenge happening around a table to create the best action.

“I think what we’re seeing more and more in business is recognition and understanding the power of diverse thought.”

So I think we’re seeing more come through as those barriers are being broken. And one things that’s important to highlight is the importance of having men in leadership positions who advocate and really support women coming into these roles, collectively we have a responsibility to encourage the next generation of leaders to come up and come through and that requires men and women to do that.

And finally, your Drive to Survive series on Netflix is something that has had such a massive reaction, with the second series recently released, how has this opened up a new audience for you?

It’s been phenomenally successful and one of the greatest marketing initiatives that has truly engaged an audience that we would never have thought it would. It was the brainchild of Sean Bratches when he was here, Netflix and the producers, BoxToBox, have been incredible partners and they’ve really fitted into the F1 family and travelling circus.

I think what’s been so powerful and what people have loved is it’s nothing to do with the racing, it’s about relationships, jeopardy and characters within the sport. You watch any great drama series or film, everything is centred around a narrative and characters, there are all these emotions and that’s what the series captures. Certainly in series one the feedback and love from it for teams in our midfield, we were tracking drivers and their search results and who’s wanting to find out more, that went through the roof.

74% of viewers in the US are now more interested in F1 as a result and with this second series having all ten teams participate you see how genuine it is. There’s such a trust between the teams, F1, Netflix and BoxToBox that it’s unfiltered as a decision we took early on was we had zero editorial control or input.

I always use the analogy that we are the best people in the business to put on a race and Netflix are the best longform engaging storytellers in the marketplace. You have to trust them and be able to hand over your brand and let them do what they do best. I think it’s testament that we’ve done a second series and we’re talking about a third, that speaks volumes about the impact the series has had not just for us but Netflix as well.