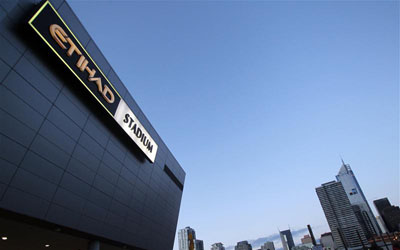 Melbourne’s Etihad Stadium has inked a a five-year deal with Telstra to upgrade its internet and replay screen technology ahead of the 2015 season.

In a deal that will significantly improve connectivity for fans and improve the match-day experience, 1,000 WiFi hotspots will be installed around the stadium.

The upgrade will include the installation of 4K technology, which will provide ultra-high definition replays.

Etihad Stadium CEO Paul Sergeant said the new technology would “put Etihad Stadium on a par with the best stadiums in the USA and Europe”.

The upgrade will bring Etihad Stadium’s technology in line with Adelaide Oval and Sydney’s ANZ Stadium.

Telstra group executive of retail Gordon Ballantyne said fans at Etihad Stadium would have a better experience with social media as well as being able to access streaming video and live statistics.

“The WiFi solution will take the event or match-day experience to an exciting new level,” he said.

AFL CEO Gillon McLachlan said the AFL was “determined that AFL fans remain at the forefront of new technology to access our game in every way possible”.