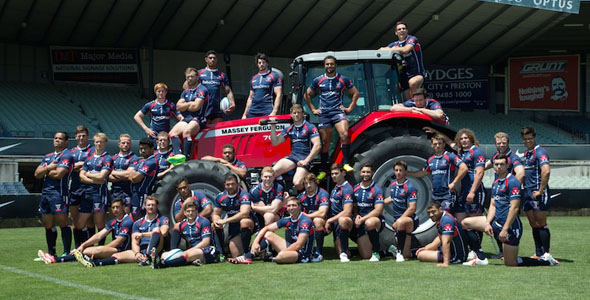 Super Rugby team Melbourne Rebels has renewed their partnership with Massey Ferguson until the end of the 2016 season.

Massey Ferguson are a Platinum Partner of the Club and have been associated with the team since 2011.

Simon Hole, the Director of Marketing (Australia/New Zealand) for Massey Ferguson: “We are very excited to add the additional two years; the Rebels are a very good fit for our business in that we share very similar core values, and we see that in the way that our customers got on board with the Rebels right back in 2011,” Hole said.

As a brand with a focus on rural strongholds, Hole believes continued regional pushes by the Rebels remain a really positive way in which to utilise the partnership to the best of its ability.

“The rural areas are obviously our heartland, especially north of the river where Rugby is very, very strong,” Hole said. “We have seen our customers get on board when we’ve had sessions with the Rebels, whether it be games, team or player events.

“It was great to see the Club play pre-season games in Albury and Geelong, and we are keen to be involved again too. It was really hot last year, so hopefully if we go out to rural areas again it can be a bit cooler!”

Rebels’ CEO Rob Clarke added: “Massey Ferguson has been a big part of our development as a Club, and we’re so pleased that they share not only our core values but also our vision for the future,” Clarke said. “They have helped to spread the Rebels gospel to the wider Victorian community, and assisted us in growing this great game throughout the state.

“I would like to thank them for their continued invaluable support, and look forward to sharing in the success of years to come with them.”