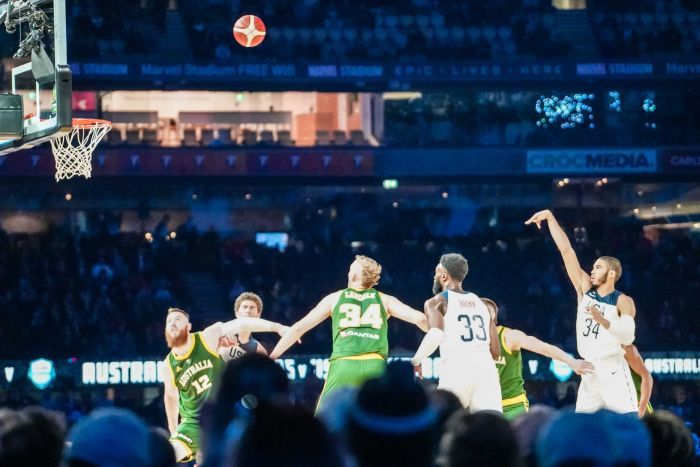 Following hundreds of complaints from unhappy spectators, Australia’s consumer watchdog has launched an investigation into Thursday’s FIBA World Cup basketball warmup game between the United States and Australia in Melbourne.

Organizers were already under scrutiny for using NBA stars such as LeBron James and Steph Curry in their promo efforts only for them to skip the games.

Fans expressed outrage on social media over seating arrangements at Docklands stadium where many were left with restricted views despite paying top dollar for tickets.

A crowd of 51,218 paid ticket prices ranging from A$69.90 ($47) for the cheapest children’s seats up to well over a thousand dollars for premium courtside seats.

You can see images of the fan experience is this report by Melbourne’s The Age.

Actor Russell Crowe was among spectators left cold by the views of the raised court at the venue, which is mostly used for top flight Australian Rules football matches.

“$1500 a ticket for this view. AUS v USA. Jokes on me,” Crowe wrote on Twitter with a photo showing a restricted view of the court.

“It’s a rip-off that people paid hundreds of dollars for a plastic chair, a blocked view and teams that didn’t feature the superstars promised.”

The Australian Competition and Consumer Commission (ACCC) said it was probing the event and would address seating concerns with organizers before the second match between the teams at the same venue on Saturday.

“We take allegations of misleading behaviour very seriously and the penalties for breaching the Act are significant,” ACCC Chairman Rod Sims told reporters in Sydney on Friday.

“We have an active investigation under way as to whether there’s been any breaches of the Act in relation to this event.”