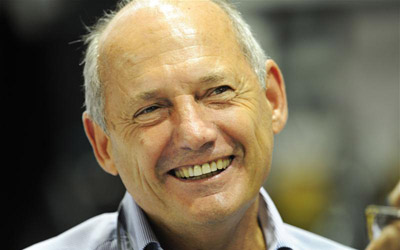 McLaren Mercedes Racing have revealed a new organisation structure which will include a new CEO role being introduced in charge of the Formula 1 team.

The announcement comes after the team appointed Eric Boullier as their Racing Director, who will join from February 3, and will report to the Chief Executive. The new CEO will also report to Ron Dennis, Chairman and Chief Executive Officer, McLaren Group.

Boullier has been at Lotus F1 Team as their Team Principal until his departure a few years ago and brings with him extensive single-seater motorsport experience, having worked in senior positions in World Series by Nissan and A1 Grand Prix before moving up to Formula 1.

Boullier will be working with Chief Operating Officer Jonathan Neale and his senior management colleagues within McLaren Racing. Neale will be acting CEO until a permanent appointment is made.

Eric Boullier said:”First of all, I regard this appointment as an honour, a privilege and a wonderful opportunity.

“The McLaren Racing workforce and the facilities at the McLaren Technology Centre are world-class, and I’m hugely excited about the prospect of joining such an outstanding team.

“I’m both eager and determined to play an active part, working alongside McLaren Racing’s other senior managers and directors, within a new operational structure, to bring about the changes that will deliver success.

“Last, I want to take this opportunity to assure the McLaren Racing workforce that I’m utterly determined to match their famous passion and commitment to win.”

“In due course we’ll announce the identity of McLaren Racing’s new Chief Executive Officer, who’ll report to me, and to whom Eric will report.

“I’m firmly of the belief that, once McLaren Racing’s restructured senior management team has been assembled, together we’ll begin the march back to full competitiveness, quickly and professionally, harnessing the fantastic depth of talent that exists within our organisation.”