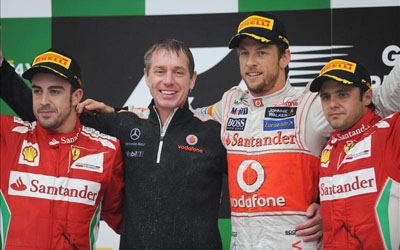 McLaren Mercedes have announced that Tim Goss, formerly the team’s Director of Engineering, has been appointed to the position of Technical Director, with immediate effect.

Tim joined McLaren in 1990 as a Development Engineer, and has been a central and successful stalwart of the team’s engineering and technical function ever since, leading car design operations since his elevation to Director of Engineering in January 2011.

Martin Whitmarsh added: “I’d like to offer my congratulations to Tim on his new position, which, after more than 20 years of exceptional service for McLaren, he richly deserves.

“His quiet and unassuming persona conceals a fierce competitiveness and a wealth of experience, coupled to an unrivalled level of expertise in the field of Formula 1 car design and engineering.

“In line with what Tim has said, I firmly believe that our technical and engineering team is the best in the F1 business, and that its strength in depth has always been and will continue to be an important element of our on-track success.

“Moreover, I’m certain that, in his expanded role, Tim will continue to lead it very capably indeed, and will evolve and improve it. That’s his brief, and it’s already clear that he’s prepared to embrace it with energy and enthusiasm.

“In truth, though, this is a natural evolution in Tim’s already very successful career, and the fact that the decision to offer him our Technical Directorship was so straightforward for Jonathan and me demonstrates two things: the robust and logical succession-planning that underpins the senior engineering personnel structure within Vodafone McLaren Mercedes, and the commitment we have to developing our people, over many years, allowing their talent and expertise to flourish in a collaborative and collegiate environment.

This follows speculation that Paddy Lowe, the previous Mclaren Technical Director, may have a position in Mercedes for 2014 clearing the way for Ross Brawn to exit the team.

“Paddy [Lowe] will be performing a different role within McLaren until the end of the year. He’s been a good and successful F1 Technical Director, and we wish him well when he embarks on a fresh challenge in 2014.”