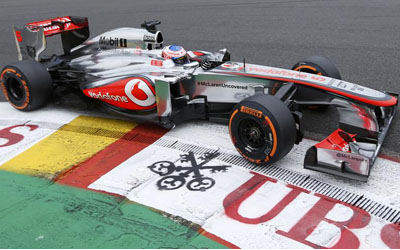 Santander will renew their deal after a long-term corporate partnership and Norton Rose Fulbright will also be a corporate partner of the team and has been appointed as the global legal advisor to the McLaren Group.

Since 2007, Santander and McLaren Mercedes have formed one of the most successful partnerships in Formula 1.  McLaren has played a pivotal role in the establishment of the Santander brand in the UK and with ground breaking initiatives, such as the 2012 London Grand Prix campaign, the partnership has delivered a consistent, demonstrable impact.

For the past four years Jenson Button has also been a key ambassador for the company, fronting major marketing campaigns, staff engagement initiatives and playing a central role in Santander’s global University’s Scholarship Programme.

Jenson Button will continue to play a significant role in Santander campaigns as the partnership progresses.

Keith Moor, Chief Marketing Officer, Santander said: “Santander and McLaren have formed a long term partnership and together we have set new standards in sports marketing.  Our decision to renew that relationship is not something that we have taken lightly, but it is based upon a proven track record of achievement and we are pleased to continue to be in partnership with one of the most iconic brands in global sport.”

Ekrem Sami, Managing Director of McLaren Marketing said: “Once again, a global blue chip brand has chosen to partner with McLaren Mercedes.  We are delighted to be able to continue our extremely productive relationship with Santander, a company that has supported us for a number of years and has committed to be part of our exciting future.

“In such a competitive international sponsorship market, the fact that such a prestigious company has chosen to partner with McLaren Mercedes is a reflection of the strength of our brand, our proven track record of delivery and the power of Formula 1 to reach an avid, affluent and influential audience.”

“By becoming a corporate partner and providing worldwide legal services to McLaren Group, we aim to reinforce the importance that we place on our people’s commitment to teamwork and excellence. We have already committed to developing a joint CSR project.”

Timothy Murnane, group legal director, McLaren Group said: “We see Norton Rose Fulbright as one of the leading global legal practices, combining a lengthy history with an appetite for change and a pursuit of excellence which resonates with our own corporate ideals. Our unique partnership will bring together two highly respected global businesses with the potential to achieve great things together.”

Today’s announcement comes as McLaren Mercedes gears up to be the first Formula 1 team to launch its 2014 car tomorrow.

McLaren’s has a number og long term sponsors including, Hugo Boss who has been with the team for 33 years, Tag Heuer for 29 years, Mobil 1 for 20 years and SAP for 16 years. These have been joined by leading global corporations including GSK, Johnnie Walker, Hilton and AkzoNobel.