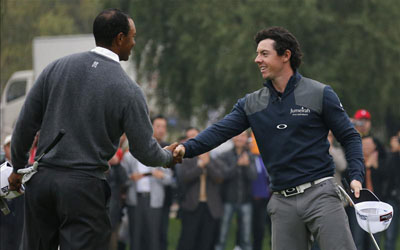 World No.1 golfer Rory McIlroy will no longer be sponsored by the Acushnet Company, which manufactures the Titleist and FootJoy brands, after they agreed to part ways when the deal ends on 31 December 2012.

McIlroy has trusted Titleist and FootJoy equipment throughout his professional career that commenced as an 18-year old in September 2007 but has been linked with a huge Nike deal of late.

“Our goal has been to provide Rory with the best equipment and service that would help him be the best player he could possibly be,” said Wally Uihlein, Chief Executive Officer, Acushnet Company. “He has been a great ambassador for the Titleist and FootJoy brands, and in turn, we are proud of how our equipment has contributed to his success. We wish Rory all the best, both personally and professionally, going forward.”

“I would like to thank Wally Uihlein and all of the tour staff and employees at Titleist and FootJoy for everything they have done for me since I turned professional in 2007,” said McIlroy. “I have enjoyed five very exciting and successful years with the company and I will always appreciate the contribution Titleist and FootJoy have made in helping me become the player I am today.”

This announcement is in line with widespread speculation that McIlroy is about to sign a very lucrative contract with Nike that has been estimated to be worth $20 million a year.

But some of golf’s greats have told the Northern Irishman to be vary of any such deal.

“I’ve changed clubs and changed equipment and every manufacturer will say ‘We can copy your clubs, we can tweak the golf ball so it fits you’.

“But there’s feel and sound as well and there’s confidence. You can’t put a real value on that – it’s priceless.”