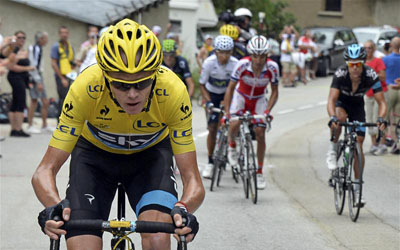 The Tour de France 2014 has signed a new partner with McCain Foods coming on board as an official supplier.

This year, canada ed for the first time, the historic race starts from Yorkshire, the home of McCain Foods. The Tour de France Grand Depart is made up of three stages, travelling through Yorkshire’s finest scenery on the 5th and 6th July, before leaving Cambridge and travelling to London on 7th July. Millions of fans will line the streets over the two days to celebrate the pinnacle of elite cycling.

The tour, which passes by a number of McCain farmer’s fields, guarantees a live audience of 4 million and will help to promote the McCain brand values, tying back to their Yorkshire and potato farming heritage as well as engaging with their target audience in local communities.

As the tour cuts through this key potato growing area, the partnership celebrates not only McCain’s Yorkshire roots but also aims to unite the local communities and McCain’s British farmers, to celebrate the joy and excitement of the Tour de France in the UK.

Mark Hodge, Marketing Director of McCain Foods GB said: “McCain are thrilled to be a part of one of this year’s biggest global sporting events and this partnership is the perfect way for us to celebrate our Yorkshire and farming heritage and engage with local communities and British potato farmers. We feel there is a natural synergy between McCain and Tour de France in Yorkshire and we are looking forward to celebrating the joy of such an exciting sporting event this summer.”