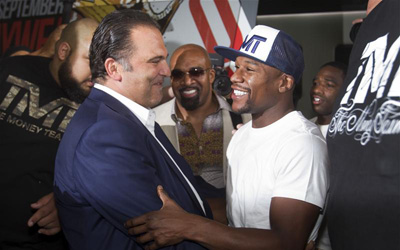 Mayweather has worked with Golden Boy on a fight-by-fight basis for all of his fights since the record breaking 2007 bout against Oscar De La Hoya, Golden Boy President, which drew 2.5 million subscriptions in America – the largest pay-per-view figure in history.

However, Mayweather has struggled to see eye-to-eye with De La Hoya and it is reported that he only worked with the firm because of Schaefer.

When asked if he would work with Golden Boy again without Schaefer, Mayweather Promotions CEO Leonard Ellerbe told ESPN: “Absolutely not. We have a great working relationship with Richard Schaefer and that will never change.

“Richard is a good friend and a great businessman and an excellent promoter. Richard will have an impact in anything that he decides to do, a tremendous impact. He built that company from the ground up and did a phenomenal job. We’ve had a very close relationship for a number of years and worked hand-in-hand on a number of great fights.

De La Hoya also had public problems with Schaefer and whilst the former Swiss banker’s exit from Golden Boy is not a surprise, the timing is, with his resignation coming days before De La Hoya’s induction into the International Boxing Hall of Fame.

“After more than 10 years with Golden Boy, it is time to move on to the next chapter of my career,” Schaefer said in a statement on Monday. “This decision has required a great deal of personal reflection, but ultimately I concluded that I have no choice but to leave. I have succeeded in banking and I have succeeded in boxing, and I look forward to the next opportunity.

“I am proud to remain a shareholder, so I have a strong interest in the continued success of the company. I am proud of what we have accomplished at Golden Boy, but I now look forward to new challenges.”

Schaefer co-founded Golden Boy Promotions with De La Hoya in 2002 and has served as the firm’s only CEO ever since.