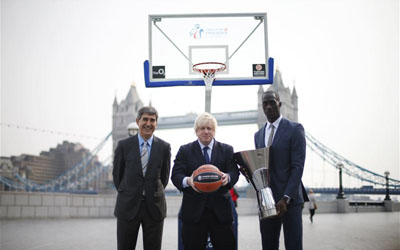 Boris Johnson, the Mayor of London has praised Euroleague for the festivities that are set to begin for the Final Four event on May 10-12.

Johnson joined in the presentation of two major additions to festivities to be held during Final Four weekend: a unique and expansive Fan Zone that will make basketball a centerpiece at one of London’s signature attractions, Trafalgar Square, with three days’ worth of activities free to the public; and the organization of activities under the One Team corporate social responsibility programme that will continue Euroleague Basketball’s grass-roots work in the UK well after the Final Four is over.

The 2013 Turkish Airlines Final Four will be played at The O2 in London from May 10 to 12, marking the first time that an international club basketball champion will be crowned in the United Kingdom.

“London is proud to be hosting the prestigious Euroleague Final Four, another testimony to this city’s status as a top flight venue for elite fixtures,” Mr. Johnson said. “I am also pleased to welcome the free Fan Zone to Trafalgar Square giving everyone the chance to have a go at this great sport. Last year’s Olympic and Paralympics Games has already given basketball a bounce in popularity from professional to grassroots level.”

Mr. Johnson received his own copy of the official game ball for the Final Four, the new Euroleague Basketball UNITE ball by Spalding, and put it to good use by taking – and making – a couple of shots on a basket set up in front of the London Bridge.

Mr. Johnson was joined at the event by AEG Europe COO Alex Hill and Euroleague Basketball President and CEO Jordi Bertomeu, who announced that the league’s signature One Team corporate responsibility programme is preparing some special partnerships to create long-lasting ties with the UK.

“Euroleague Basketball has a long-term vision in the UK beyond this year’s Turkish Airlines Euroleague Final Four and initiatives like our One Team programme demonstrate the positive impact sport can have on local communities and grass-root development,” Mr. Bertomeu said.

Among the other special guests was Team Britain player and former Final Four participant Pops Mensah-Bonsu, who assured his fellow Londoners that they are in for a great time when the Final Four comes to town.

“The Turkish Airlines Euroleague Final Four is the biggest basketball event outside of the NBA Finals and the commitment by Euroleague confirms London as an up-and-coming city in basketball terms,” Mr. Mensah-Bonsu said. “I have no doubt the local support will be huge, much like when I played in the Paris Final Four event. I look forward to heading down to the Turkish Airlines Euroleague Fan Zone in Trafalgar Square to shoot some hoops with the kids and share the love we all have for this sport.”