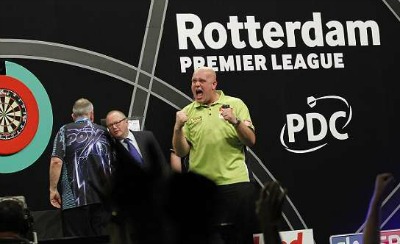 The inclusion of Matchroom Sport’s catalogue of TV sports events means DAZN will now be offering subscribers access to major tournaments across seven more sports, including exclusive coverage of all PDC Darts events. The full catalogue of programming includes:

SPORT1 will continue to show live free-TV  coverage of a number of the leading Darts competitions including the World Darts Championship, the Premier League Darts, World Matchplay and Grand Slam of Darts as well as delayed coverage of all the other sports competitions.

“Matchroom Sport, SPORT1 and Perform have long-standing and successful partnerships and I am delighted to be able to continue this relationship and to be a part of DAZN’s and SPORT1 content offering.”

Olaf Schroeder, COO Sports of Constantin Medien AG and Chairman of the Management of Sport1 GmbH: “Through this newly signed cooperation with Matchroom Sport together with DAZN, we continue to write history with the longstanding, mutual success story of darts in Germany. With the World Darts Championship, we will extensively present to the constantly growing fan club the absolute annual highlight of the sport on German free-TV. Together with our 360° multimedia coverage and our team featuring commentator Elmar Paulke and host Sascha Bandermann, we want to build on in the tremendous positive development of darts sports.”

John Gleasure, Chief Commercial Officer of DAZN said: “DAZN is all about putting fans first by offering the most extensive range of live and on demand sports content. This long-term partnership with Matchroom Sport provides our members with the most comprehensive Live Darts coverage from one of Germany’s fastest growing sports and an extensive range of other live sports. We are delighted to extend our long standing relationship with Matchroom Sport and providing a new home for the huge number of German Darts fans.”