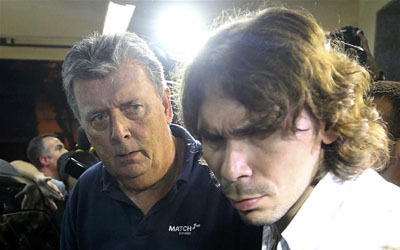 English businessman Whelan was arrested by Brazilian police on Tuesday as part of Operation Jules Rimet – a probe into a suspected multi-million-pound ticket touting operation.

Whelan (pictured left) has become the action’s 12th arrest and has been subsequently released on bail, and Match insist their director will assist in the ongoing inquiry.

A statement released by the company read: “Ray Whelan has been released from police custody and will assist the police with further enquiries.

“Match have complete faith that the facts will establish that he has not violated any laws. Match will continue to fully support all police investigations, which we firmly believe will fully exonerate Ray.

“In the meantime, Ray Whelan, as well as the rest of the Match personnel, will continue to work on our operational areas of responsibility in order to deliver a successful 2014 FIFA World Cup Brazil.”

The son of FIFA vice-president Julio Grondona also found himself facing accusations of selling tickets at more than face value last week, denying the claims and insisting he had given away some tickets to a friend.