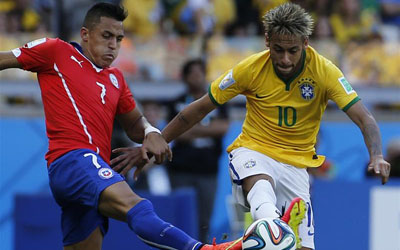 Mastercard has been announced as a sponsor of the Copa America next year to be played in Chile.

The 44th edition of the tournament consisting of all South American countries will be played between 11 June and 4 July 2015.

This will be the tenth occasion in which Mastercard has sponsored the competition.

They will be supporting the Copa America trophy tour which will be paraded around Latin America next year before making its way to Chile.

“The renewal of this sponsorship demonstrates the commitment that MasterCard has with football in Latin America, see ” said Gilberto Caldart, viagra order president of MasterCard for Latin America and the Caribbean.

“The passion of Latin Americans for football is recognized all over the world. And sponsoring the Copa América allows us to provide cardholders with benefits and priceless experiences all over the region.”

Geraldine Cooper, head of MasterCard Sponsorships for Latin America and the Caribbean said: “We are thrilled to be sponsoring our tenth edition of Copa América.

“There are countless priceless experiences that our brand has enabled among consumers throughout these years.

“Now, with national teams in Latin America experiencing great success with football and star players from all over the region standing out internationally, we expect this tournament to be another great opportunity for MasterCard cardholders to benefit from the many offers and experiences with Copa America and the sport of football that they are so passionate about.”