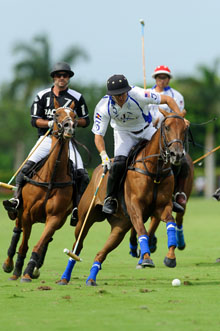 “We are thrilled to have Maserati back at IPC, not only as the event’s title sponsor but as the event’s exclusive automobile partner. It’s an iconic brand that personifies passion. Maserati is instantly recognized as one of the world’s great brands,” said John Wash, president of the International Polo Club (IPC). “We look forward to working with Maserati, whose very foundation is based upon passion and a balance of performance and luxury. It’s the perfect pairing of two world-class brands.”

Touted as the Super Bowl of polo, the U.S. Open Polo Championship is a four-week, 26-goal tournament that will highlight the International Polo Club’s 11th season, and four months of winter, high-goal polo in Florida. The championship matches will be played on March 30, and April 6, 13, and 20 (Easter), showcasing the world’s most fabled, 10-goal players, including Adolfo Cambiaso and Facundo Pieres.

“Polo awes with its combination of beauty, power, and precision. The connection with our core values of inspired design, passion, performance, and sophistication is an ideal match,” commented Peter Grady, president and chief executive officer of Maserati North America, Inc. “We are proud to bring Maserati back to IPC for a second year.”

The U.S. Open Polo Championship, the most prestigious tournament in the United States, dates back to 1904 where it was first played at Meadowbrook Polo Club in Old Westbury, N.Y. In 2004, the tournament headed south to the tropical fields of the International Polo Club Palm Beach in Wellington, Fla., where the thundering of hooves have graced the greens ever since.