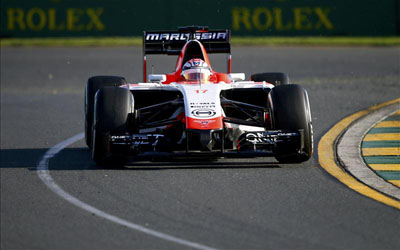 Marussia have joined fellow Formula 1 team Caterham in administration and will miss this weekend’s United States Grand Prix, it was confirmed on Monday.

A statement released by the administrators, FRP Advisory LLP, said that with current owner Andrey Cheglakov no longer able to provide investment, the team had tried unsuccessfully to find backing elsewhere.

The administrators have refused to rule out a return at either the Brazilian or Abu Dhabi GPs but added that Marussia’s re-appearance – not to mention the futures of nearly 200 employees – depends on whether a buyer can be found.

The statement, made by joint administrator Geoff Rowley, added that only a “very limited window of opportunity” exists for talks.

“Whilst the team has made significant progress during its relatively short period of operation, the highlight of which included securing two constructors championship points in the current F1 season, the position remains that operating a F1 team requires significant ongoing investment,” said Rowley.

“With the existing shareholder unable to provide the required level of funding, the senior management team has worked tirelessly to bring new investment to the team to secure its long term future, but regrettably has been unable to do so within the time available. Therefore, they have been left with no alternative but to place the Company into administration.

“The Company will continue to operate while the joint administrators assess the longer term viability of the Company in its present form.

“Following Austin, there are two further rounds of the 2014 championship remaining, in Sao Paulo and Abu Dhabi, and the team’s participation in those races will depend on the outcome of the administration process and any related negotiations with interested parties in what is a very limited window of opportunity.

“No redundancies have been made following the Company’s entering into administration and all staff have been paid in full to the end of October. The ongoing staff position will however be dependent on whether the Company can secure new investment in the limited time available.

“We remain highly focused on engaging with interested parties.”

Caterham F! announced on Friday that the team had been taken over by administrators and will also miss the US Grand Prix.