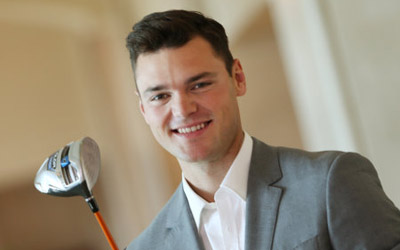 After signing an endorsement deal with Mercedes-Benz, tadalafil Kaymer will work on a series of initiatives to raise Etihad Airways’ brand awareness in Germany and other key markets around the world. This includes a promotional video being filmed in Abu Dhabi this week to showcase Etihad Airways’ award-winning service and also position the UAE capital as a leading golf and travel destination.

The shooting schedule coincides with the Abu Dhabi HSBC Golf Championship 2014, with Kaymer competing for his fourth title at Abu Dhabi Golf Club between 16 and 19 January.

Peter Baumgartner, Chief Commercial Officer at Etihad Airways, said: “As one of the world’s leading golf stars, Martin Kaymer has dedicated fans throughout the world, including his home country of Germany. Behind his impressive sporting achievements is a determination to work hard and achieve excellence, values that he shares with Etihad Airways.

“This makes him the perfect Etihad Guest Ambassador and we look forward to working with Martin on a series of projects, including the launch of Etihad Holidays in Germany. Germany is our tour operating division’s second venture outside of the Middle East, offering an extensive range of holiday packages to Abu Dhabi and other destinations across our global network.”

Commenting on his appointment as Etihad Guest Ambassador, Martin Kaymer said: “As a professional golfer, I am constantly travelling around the world and need to arrive feeling relaxed, energised and ready to go. Little things make a big difference when you travel as much as we do.

“Etihad Airways’ standards and attention to detail are consistently high at every stage of the travel experience, which makes me happy each time I fly with them. Therefore, I am extremely honoured to become the latest Etihad Guest Ambassador and look forward to working on key promotional activities, including the launch of Etihad Holidays in Germany.”