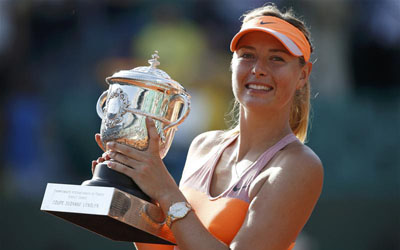 After winning the prestigious French Open Women’s title for the second time, sales international tennis star Maria Sharapova has secured an agreement with the Avon fragrance family as the face of Avon Luck, two new sparklingly luxurious fragrances for men and women.

She won her fifth Grand Slam title with her French Open victory over Simona Halep last Saturday and now seems to cashing in with this partnership.

“I am excited to represent Avon Luck, a fragrance that reminds us to savor and truly enjoy our triumphs,” says Sharapova. “I always say the harder you work, the luckier you are because you strive for bigger goals. I love being able to partner with a company like Avon that empowers women around the world to accomplish their dreams.”

Vice president of global fine fragrances at Avon, Danielle Bibas, suggests Maria is the perfect choice for the venture

“Maria is an amazing athlete and businesswoman who has had lots of success in life,” Danielle said. “She has this sophisticated natural beauty. She’s someone who really exudes happiness.”