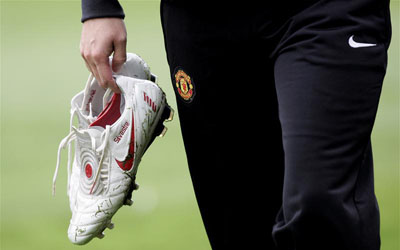 Manchester United are looking at securing the biggest sponsorship deal in football history in a potential £1bn Nike renewal.

The Daily Mail reports that negotiations have begun with Nike over a new deal. The old agreement, which was worth £303 million plus a profit of sales over 13 years, expires in 2015 but the paper claims that negotiations are about to get going for a similar long-term deal. Nike have an exclusive six-month window for negotiations that officially begins in February.

United have based the potential upsuge in sponsorship on two things: first, that their shirt sponsorship deal has risen six-fold since the old agreement was signed, and second that Rory McIlroy alone is to be given £156m for a 10-year deal to wear Nike clothes and have the company’s logos on his clubs.

United earlier this year revealed a £52 million shirt sponsorship deal with Chevrolet starting in the 2014/15 season.

“The Glazers have long been unhappy with the Nike deal they inherited with their buyout of the PLC which they consider restrictive and undervalued, he told iSportconnect.

“Several changes have been negotiated over the years but this is their first real opportunity to shape the deal they believe the value of the MU brand deserves.

“Given the length of the previous deal (13 years) and the importance of MU to the Nike football portfolio (it is second only to Brazil in terms of the number of replica shirts sold globally), the Glazers will wish to maximise the financial opportunity for the club and a billion dollar deal over an extended period may not be wide of the mark.”

“It is unlikely the owners will wish to use the proceeds of such a deal to pay down debt. As seen from the record breaking £47m deal for shirt sponsorship recently announced with Chevrolet and implied by Ed Woodward (MU’s Executive Vice Chairman and the Glazers’ man in London) in his interview with Sky this week, the club is comfortable with the current level of debt on the balance sheet.

“Its aggressive commercial strategy is designed to ensure that sufficient revenue is generated to cover interest payments and the Nike deal will undoubtedly have a big part to play in this. An attractive by-product of this strategy will be compliance with UEFA’s FFP rules, not that this was ever a significant threat to MU given the owners’ preference to fund development from operating revenues rather than investing their own money in players,” he added.