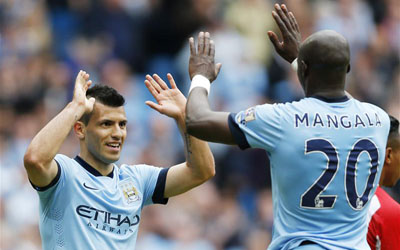 The new immersive VR experience was trialled with a select group of Manchester City fans in London, viagra New York and Melbourne who were tuning in to watch Manchester City go head-to-head with Arsenal at the Etihad Stadium on 8 May as the action unfolded in Manchester.

To take advantage of this all-new matchday experience, generic fans participating in the test simply slipped on a VR headset which placed them right in the heart of all the action on the pitch.

This innovative offering, delivered in collaboration with VR start-up LiveLike and supported by the Premier League, Sky Sports, US broadcaster NBC and Australian broadcaster Fox Sports, marks another step in Manchester City’s journey of early experimentation with new technologies that provide fans with unique points of view on the Club, the players and the matches.

Previous projects leading up to this have included using iON point-of-view cameras on First Team players during training, placing a 360? camera on the roof of the players’ tunnel on matchdays, and launching a Google Cardboard-enabled CityVR app, which represented the Club’s first foray into the world of virtual reality.

“At Manchester City, we’re constantly exploring new ways to connect with our fans. In doing so, we proactively look for and embrace innovative technologies that can help complement our physical touch points and strengthen our relationship with our fans. Virtual Reality is one of them.”

“We began looking at how we could use VR to enhance the fan experience over a year ago. Now, thanks to a great collaboration with partners Sky Sports and LiveLike who share our passion for providing fans with the best sporting experiences possible, we’re delighted to be able to bring an official live Premier League match to virtual reality for the first time ever. There’s still a lot to be done until the technology matures and we find the right content offering, but the fans’ reactions to this test prove how incredibly engaging and transformational virtual reality can be.”

“At Sky Sports, we’ve always been at the forefront of innovation, looking for new ways to deliver the best possible viewing experience. We are the first broadcaster to test live VR for Premier League football. Working in partnership with Manchester City and LiveLike has allowed us to push the boundaries once again.  It is the next step in our VR story and the results are really impressive.  Through our dedicated Sky VR Studio we will continue to explore opportunities across all genres of content in the Sky offering.”