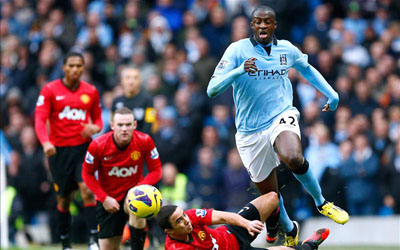 Although the sum is still enormous, the figures represent a significant improvement from the previous season when they lost £197.5m.

Failure to progress from the Champions League group stage has had a big impact on turnover – this year and last.

But City are confident even the huge losses will not have an impact on their ability to meet UEFA’s strict Financial Fair Play guidelines as £15m comes from infrastructure and youth development costs.

More importantly, around £80m comes from contracts that pre-date 2010, from which City expect to get some kind of relief.

City’s annual statement for the year ending May 31 2012 said the “capital base of the club has also been strengthened through the issuing of £169m in new equity during the year, avoiding debt-based funding and continuing to ensure that the club is virtually debt free”.

Chief executive Ferran Soriano said: “What I have found is a club on the verge of a historic transformation, reinforced by a genuine commitment to doing things well.

“It is a club with a rich history and the potential for an even brighter future.”

City posted marginal increases in gate and TV revenue, but they made big strides in the commercial sector – revenue went up from £64.7m to £121.1m.

Chairman Khaldoon al-Mubarak said: “The hard work of everyone involved at Manchester City

over the last four years has begun to create an obvious momentum,” he said.

“However, 2011-12 will always be remembered as a particularly significant year in the history of the Club, a season when Manchester City demonstrated an ability to win in even the most challenging of circumstances.

“It is important to recognise the personal and ongoing influence of Sheikh Mansour bin Zayed on the rapid transformation that is taking place.”