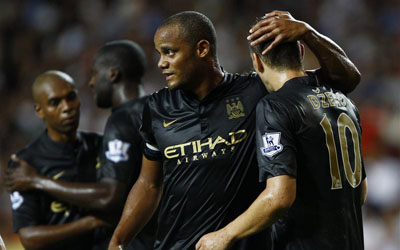 Manchester City FC have announced today they have launched a new mobile gaming app to increase fan engagement during games.

‘City Connect’ is an interactive mobile game which enables City fans watching live matches to get more involved than ever before in the action.

By registering directly with the App or logging in via Facebook Connect, order each player gets a unique ‘game board’ made up of professional football players and match action.

Commenting on the app launch, allergy Tom Glick, medic Chief Commercial and Operating Officer for Manchester City Football Club, said: “We are always looking at ways we can build on the experience of watching Manchester City play for our fans. City Connect takes the best of live sports and social gaming and allows fans both at the match and those watching at home to get more involved than ever before in the action.”

CEO for OneUp Sports, Daren Trousdell said of the partnership: “We are excited to announce the addition of Manchester City Football Club to the OneUp Sports network.

“The emergence of Manchester City as a global force in the world’s biggest game has seen them become leading innovators in the provision of engaging digital experiences as they further increase their fan-base and global reach. In partnering with us, MCFC have joined some of the world’s premier sports brands including the NFL, MLB, NBA, NHL and more in leveraging the strength of the OneUp Sports network to create further global user engagement and sponsorship opportunities via our market leading, real time mobile sports platform.”