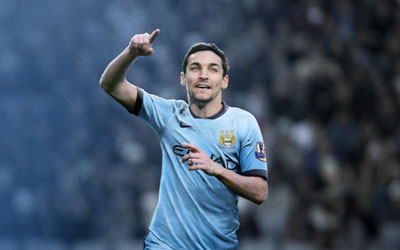 Designed for City fans, online the City App iPad Edition is the latest addition to the Club’s ever expanding digital portfolio.

The app includes a new ‘match hub’ feature which aggregates all news, health photos and videos related to each match so a fan can view the build-up article, link pre-match press conference, match highlights, match report, post-match player reactions, and more – all in one convenient location.

Through the new iPad Edition app, City fans will also be able to browse and buy tickets and official club merchandise.

Diego Gigliani, Director of Marketing, Media & Fan Development, said: “Manchester City prides itself in actively seeking new ways to engage with our fans around the world. By embracing technology and digital media, we’re able to create new and innovative products, like the new City App iPad Edition, which brings the club’s matches, players, and content closer to our fans, wherever they may be.

“iPad has become an increasingly popular device over the last four years. We’ve looked carefully at how people use their tablet; in what environments, how they consume content, what apps they enjoy the most and we quickly recognised that users interact with this device in a different way from their smartphone or desktop PC. That’s why we’ve launched City App iPad Edition with a completely redesigned user experience full of rich video and imagery, smart gesturing, social sharing and more.”