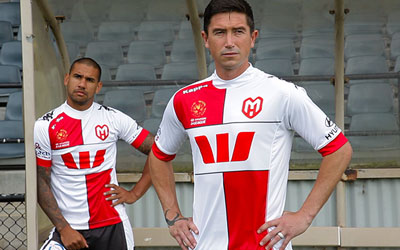 The consortium also includes the ownership group of the Melbourne Storm as minority shareholders with a 20 percent stake.

Ferran Soriano, ambulance CEO of Manchester City, said: “We are excited about the opportunity to make Melbourne Heart one of the most successful football clubs in Australia and throughout the region.  We believe the strong sports culture of Melbourne combined with the football and commercial expertise within our consortium will make for a powerful combination both on and off the pitch.”

Bart Campbell, Chairman of the holding company Heart Consortium Group and Chairman of the Melbourne Storm NRL side, said: “Partnering with City to co-invest in Melbourne Heart will further strengthen the sporting landscape in one of the world’s greatest cities and bring a range of new capabilities to AAMI Park.  We are excited to be a part of this unique project. It is our shared ambition to replicate the model that City created with the New York Yankees around New York City FC and for both organisations to benefit as a result.”

He added: “We are grateful to Peter Sidwell and his Board for creating a Club with such obvious strengths and potential.”

Speaking on behalf of the exiting Board of Melbourne Heart FC, Chairman Peter Sidwell said, “The Board feels that with the successful establishment and evolution of the Club over the last four years, Melbourne Heart now stands on sound commercial and financial foundations.  The Board feels that the next phase of the club’s development can be most fully realised with this new investment and the associated benefits that the enthusiasm of the consortium will bring.”

FFA CEO David Gallop said the acquisition of the Melbourne Heart licence was a huge vote of confidence in the future of the Hyundai A-League.

“Football has moved into the mainstream of Australian sport and is ideally placed to benefit from the boom in football across Asia,” said Gallop.

“Manchester City and their Australian partners have made a strategic investment and I welcome them to our growing competition. It’s another sign that the world is taking notice of Australian football.

“Manchester City and their partners will bring a high level of expertise in football and sports business matters and that can only strengthen the Melbourne Heart and the Hyundai A-League as a whole.”

Regarding its plans for the Club, Ferran Soriano stated: “The first thing we must do is take the time to listen and learn and then to develop our strategy for strengthening the Club over time.”