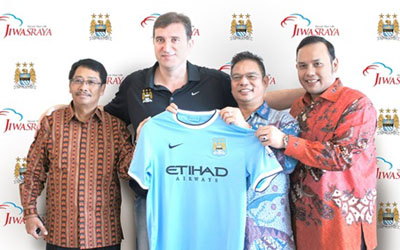 The two year deal will see the state-owned company become the Official Insurance Partner in Indonesia.

As part of the partnership, Jiwasraya have the rights to produce TV ads with City’s stars, in addition to featuring the Club crest and player imagery in marketing campaigns throughout Indonesia.

Commenting on the partnership, Tom Glick, Chief Business Officer for Manchester City, said: “Jiwasraya’s outstanding reputation in Indonesia for educating people to plan for the future, in addition to their core values such as integrity and competence, make them the perfect fit for Manchester City. We look forward to working with Jiwasraya and their customers over the coming seasons to bring them closer to the game they love.

“Manchester City is extremely proud to have a rapidly growing and passionate fan base in Indonesia. This enthusiasm for football was clear for all to see in a recent City supporter event at a Jakarta shopping mall that was attended by thousands of local fans. While the launch of our Indonesian website, twitter and Facebook page has resulted in our Indonesian fans now accounting for our biggest social media following outside of the UK.”

Hendrisman Rahim, President Director of Jiwasraya, added: “Since it was founded in 1859, Jiwasraya has established itself as the best service provider and the most trustworthy investment and insurance company in Indonesia. We saw partnering with Manchester City, the current champions of the Barclays English Premier League and notably the most progressive football club in the world both in global development and fan base, as the right strategic approach to boost Jiwasraya’s brand.

“It can help us to win potential consumers’ minds, because football will always be the biggest passion of Indonesian society. Aligned with the winning-spirit of Manchester City, Jiwasraya will always seek to grow through continuous innovation as well as continuing to facilitate Indonesian society to build a better future, to be champions, together.”