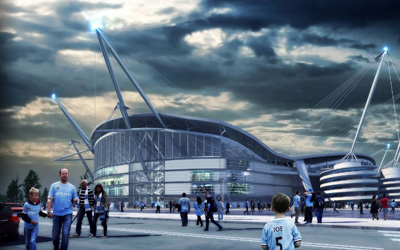 Premier League champions Manchester City have announced plans for a further expansion to the Etihad Stadium, which will see the total capacity top 55,000.

The new plans revealed today will add three more rows of seats at pitchside and is in addition to the work already started on an extra 6,000 seats in the South Stand.

The whole redevelopment will be completed in time for the start of the 2015/16 Premier League season.

Tom Glick, City’s chief commercial officer, said on the club’s website: “We have always been committed to bringing fans closer to Manchester City, to the players and to the pitch.

“Whether that’s through digital innovation, community work, international tours, or as in this case, physically allowing fans to be right next to the action, it is our top priority. We are already looking forward to seeing the expanded stadium in action for the 15/16 season.”

The club has also been given planning permission to add 6,000 more seats to the North stand if they decide to carry out the third phase of expansion.