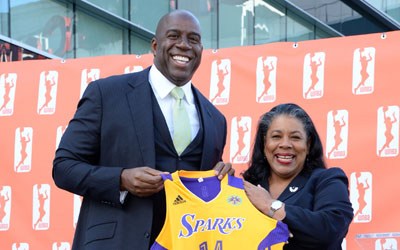 The deal was unanimously approved by the WNBA and NBA Board of Governors.

The franchise will remain in Los Angeles and play at STAPLES Center. The WNBA’s 2014 game and television schedule will also be announced this week.

“We are thrilled to welcome Magic Johnson and Mark Walter to the WNBA,” said Richie. “With their proven track record in the business realm, their commitment to the city of Los Angeles through civic engagement, and their passion for the game of basketball, we look forward to partnering with our new owners to usher in a new era for this iconic team. This is a great day for Los Angeles, the Sparks franchise, its players, and of course, the loyal fans who have been so supportive of the team for 17 seasons.”

“This is a great day for the city of Los Angeles and the Sparks,” said Johnson. “The leaders of this great city came together quickly to keep this franchise right where it belongs—in the city of Angels. Thanks to my sister, Evelyn, playing college basketball, I have a great appreciation of the talented players that represent the WNBA. Our group will now work together to bring our loyal fans another WNBA championship. ”

“Earvin came to me and said we need to help save the Sparks and keep them in Los Angeles,” Walter said. The decision was quite easy for our investment group due to the passion Magic has for this city, these great athletes and our phenomenal fans. This team and its great players should remain a part of the sports fabric of this wonderful city.”