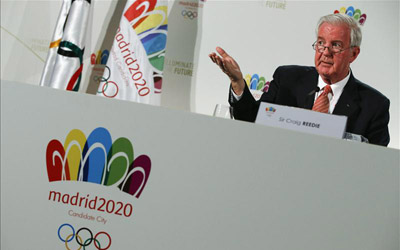 Sir Craig Reedie, the IOC head of the Evaluation Commission has revealed he found Madrid ‘greatly impressive’ during his visit to the Spanish city for the bidding of the 2020 Olympics.

Just a few weeks ago Tokyo was rated ‘hugely impressive’ and when asked about the difference Sir Craig replied that they were equivocal, “If you want to translate ‘hugely’ for ‘greatly’ or vice versa, I’m quite comfortable about that.”

This should leave third and final city Istanbul in a quandary as to what will be their final report card.

Spain has been undergoing an economic crisis, however the government views bidding as a plum opportunity to jump start the economy and give the youth something to get inspired about. And it is proving to be working as the IOC released their support levels in the nation at 81% in favor.

And in spite of the country’s economic crisis Reedie clarified, “We were certainly made aware by the bid committee where the Spanish economy is, and we thank Madrid for their openness and honesty.

“They told us that the Spanish economy has had a very difficult time, but that it has stabilized and will improve, and we have noted that in our report.”

IOC Executive Director of the Olympic Games, Gilbert Felli, spoke about the added value of the Madrid bid as approximately 80% of the venues are already existing.

”A big part of the investment has been made already,” said Felli, “and that’s why it’s not as huge (an investment) as if you start from scratch.

“Therefore, the crisis will not affect this too much. Madrid has understood the changes they needed to make, and we have seen the quality of the guarantees and improvements in the process of Madrid’s bid.”

The IOC’s technical recommendations report will be released at the July 3/4 meeting in Lausanne giving the final outcome for each of the three cities carried out by the Evaluation Commission.

What city do you want to see host the 2020 Olympics? Have your say in the iSportconnect poll.