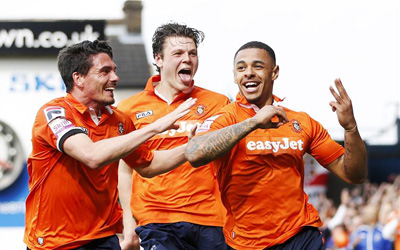 Luton Town Football Club have marked their return to the Football League with a one-year extension to their sponsorship agreement with EasyJet.

The low-budget airline will remain on the Hatters’ front of shirt as a part of the deal and continues the relationship which started in 2009.

EasyJet sponsored the team despite their relegation into non-league football, arthritis but have been rewarded after Town won the Conference in 2013-14 and gained promotion back into League Two.

Sophie Dekkers, medicine easyJet’s UK Market Director said: “We are really pleased to be extending our shirt sponsorship and partnership with the Hatters for another year, especially ahead of this pivotal season which sees the team’s return to the Football League.

“Luton is easyJet’s home town and as one of the region’s largest employers, we are proud patrons of the club and its community of supporters who bring orange spirit to every match. We look forward to seeing the team flying up the league table. Luton are Back.”

The club’s Managing Director, Gary Sweet added: “It goes without saying that we are absolutely delighted to have easyJet onboard with us as we embark on our first season back in the Football League.

“They, like many of our supporters, have shown great passion and loyalty during our time in the Football Conference.

“Although easyJet is recognised nationally and indeed internationally, we are proud to have maintained the relationship with a company whose links, at heart, lie locally.”