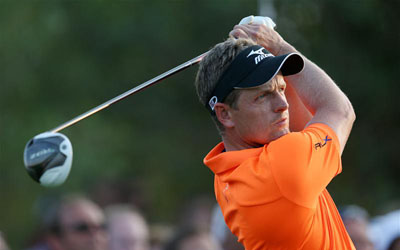 World No. 3 golfer, Luke Donald has today inked a sponsorship renewal with Mizuno, a leader in golf technology and innovation.

The agreement ensures that Donald, the world’s premier iron player, will continue to play the Mizuno equipment that has led him to 13 professional victories, including his incredible 2011 campaign which propelled him to the top rank on both PGA Tour and European Tour money lists in the same year.

Donald established his playing credentials with Mizuno during a standout career at Northwestern University. Donald signed on as a Mizuno Brand Ambassador in 2003 and has since recorded 13 professional tournament wins with Mizuno equipment.

“I feel as if I am playing as well as ever at this stage in my career. Over the next few years I want to be in a position to win major championships and to continue to improve,” Donald said. “We’ve refined my Mizuno equipment in the last couple of seasons and I’m really happy with what I have in the bag right now, so it gives me great pleasure to extend this relationship. Mizuno is the most precise, incredible club-maker out there, and I’m honoured to represent this quality brand.”

Akito Mizuno, Mizuno President and grandson of company founder Rihachi Mizuno, added: “Luke Donald and Mizuno share a special long-term relationship that we are delighted to continue. Luke has become a very special friend to Mizuno over the years. He perfectly represents our company, and we look forward to what Luke will accomplish in the next few years.”