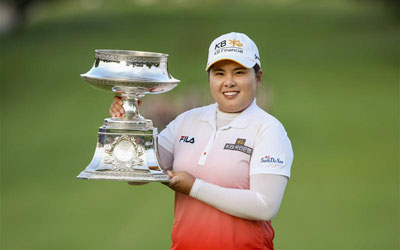 LPGA Championship to be Rebranded after KPMG Sponsorship

The revamped tournament brings not only new money to the table for the tour — the purse, which is $2.25 million for the Wegmans LPGA Championship this year, will climb to $3.5 million in 2015 — but also greater coverage for women’s golf. In addition to Golf Channel televising Thursday and Friday play, weekend rounds will be aired on NBC.

The five-year deal includes next year’s event to be played at Westchester Country Club 35 minutes north of New York City. The tournament will travel, with no permanent home, but the preference for KPMG is to play it in the New York area as often as possible.

On the years when the men’s tour has majors in that area, Chicago, Houston and Atlanta are cities KPMG, the tax and auditing giant that has endorsement deals with Phil Mickelson and Stacy Lewis, would consider.

The move deepens the relationship between the LPGA and the PGA of America, whose 27,000 teaching members have formed an alliance with the LPGA Teaching and Club Pro Division, bringing medical benefits and legal protection to the women teaching pros.

“KPMG is proud to take on this groundbreaking sponsorship and to work with the LPGA, the PGA of America and NBC to inspire today’s and tomorrow’s women leaders,” said John Veihmeyer, Global Chairman of KPMG. “This collaboration will not only bring women’s golf to new audiences – it also creates opportunities to expand women’s leadership on and off the course, empowering today’s women leaders and cultivating the next-generation of female leaders.”

“This is a landmark moment for the PGA of America as we partner with KPMG and the LPGA to embrace an historic Championship and focus on the advancement of women,” said PGA of America President Ted Bishop. “We look forward to teaming with the LPGA to make the KPMG Women’s PGA Championship the can’t-miss week for female leaders. Together, we believe this Championship – broadcast to millions around the world – will energize new audiences in our collective effort to grow the game.”

The KPMG Women’s PGA Championship field of 156 will include the top eight finishers from the previous year’s LPGA Teaching & Club Professional National Championship, including PGA of America women members if they rank among the eight positions.

“The LPGA Championship has a very proud 60-year tradition and I couldn’t be more excited to carry this forward in an even bigger way with the partnership of KPMG, the PGA of America and NBC. The Championship will now reach even greater levels of global exposure, player opportunities, and community impact,” said LPGA Commissioner Michael Whan. “This event will change lives – both for the female professionals that will compete in the KPMG Women’s PGA Championship, and for the women it will impact in both the women’s leadership summit and community initiative.”