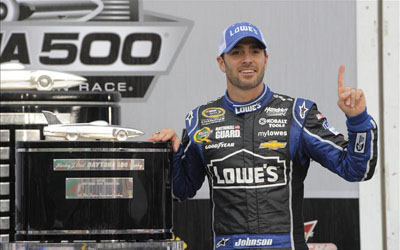 Lowe’s Companies Inc. have continued their successful relationship with Hendrick Motorsports after signing a two-year contract extension that secures the full-season primary sponsorship of the No. 48 NASCAR Sprint Cup team and five-time series champion Jimmie Johnson in 2014 and 2015.

The agreement builds upon a partnership launched in 2001 when Johnson was selected to drive for the new No. 48 Hendrick Motorsports team. Now in its 12th full season, the sponsor-driver-team relationship has become one of the most successful in NASCAR history.

”It has been a great ride with Jimmie since he started in the Cup Series 12 years ago,” said Tom Lamb, Lowe’s chief marketing officer. ”We are proud to sponsor one of the most elite teams and drivers in racing and have a five-time champion carry the Lowes brand each week.”

Since his first full-time Sprint Cup season in 2002, Johnson has earned 61 victories — the most in the series during that span — and never finished lower than sixth in championship points.

On Sunday in his 400th Cup race, Johnson drove the No. 48 Lowe’s Chevrolet SS to his second career Daytona 500 win. In the process, he became just the second driver (teammate Jeff Gordon is the other) to have the same primary sponsor for each of his first 400 Cup starts.

”Lowe’s believed in me before I had any success,” said Johnson, 37, whose contract with Hendrick Motorsports runs through 2015. ”They are all Ive ever known in my Sprint Cup career, and their support of me and the No. 48 team is second to none in the sport. Weve been together for this crazy ride, and Im so happy were continuing it together. They truly are family, and Im proud to represent them.”

”We caught lightning in a bottle with this combination,” said Rick Hendrick, owner of Hendrick Motorsports. “Jimmie and Chad have been successful because they always have a plan and do a great job executing. Lowes is the same way as a sponsor. The partnership has been incredible, and were looking forward to working together for many more years.”