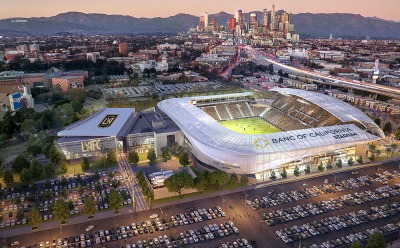 Los Angeles Football Club (LAFC) have named their new 22,000 seater stadium the Banc of California Stadium after a sponsorship deal

The new state-of-the-art development at the site of the former Los Angeles Sports Arena will bring more than $350 million in private investment to South Los Angeles. T

his includes a district that will be active on non-game days, 365-days of the year, that will feature a large public plaza, restaurants, retail store, and a conference and events center, serving as a sports, entertainment, civic, and cultural landmark for Los Angeles.

“We start here,” said Larry Berg, LAFC Lead Managing Owner. “After years of planning and hard work we are set to make history here in the heart of the city.

“Banc of California Stadium will allow for greater sports-viewing and live entertainment experiences to take place in Los Angeles than ever before,”

“This world-class stadium,” said Peter Guber LAFC Executive Chairman and Owner, “Will be a state of the art venue featuring ‘state of the heart’ experiences for players, fans and artists.”