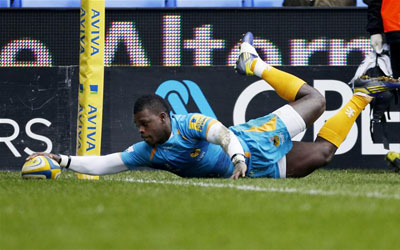 London Wasps Gets Sponsorship Boost Ahead of European Play-Off

Former London Wasps sponsor EMC has returned to support the Club in their European quest, generic as presenting sponsor of the home leg in this weekend’s European seventh place play-off.

EMC2, a global leader in enabling businesses and service providers to transform their operations and deliver information technology as a service, was Wasps front of shirt sponsor between 2009 and 2012 and has returned as the presenting sponsor of Wasps play-off game at Adams Park on Sunday 18th May.

As part of the partnership, EMC2 will receive in-ground branding, stadium activation space, hospitality and behind the scenes opportunities, as well as promotion through Wasps communications and marketing channels, as “EMC2 presents the European Rugby Champions Cup Play-Off.”

EMC2 UK&I Managing Director James Petter said: “EMC2 is thrilled to once again join forces with London Wasps. We are excited by the developments and signings that London Wasps have made in recent weeks and we have high aspirations for them. We are proud to be able to support them as they target a return to top flight European rugby.”

London Wasps Commercial Director, Luke Organ, added: “This partnership with EMC2 is hugely significant for Wasps and reflects the positive progress made by the Club this season. It is fantastic to be able to re-build relationships with leading organisations who have supported the Club in the past.

“To have a sponsor of the calibre of EMC2, a global leader in the technology industry, backing us is evidence of the successful commercial programme being developed at London Wasps, matching the squad’s performances which have provided this opportunity to play in Europe’s top tier next season.”