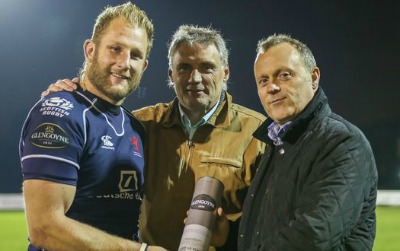 Ally Miller, Scotland Under 20 International was named man-of-the-match after the first home game of the season against London Welsh and was presented with a personalised bottle of Glengoyne 15 Year OId. This will continue throughout the season after all home matches, making the award a  permanent fixture in the match day activity at the Athletic Ground.

The whisky will also be represented at the London Scottish events throughout the season, including St Andrew’s Day at the Savoy, Burn’s Supper, Legends and Hall of Fame Dinner as well as the End of Season Dinner.

Glengoyne also feature on the right sleeve of the brand new London Scottish home and away kits for the 2016/17 season, which both include a new tartan trim alongside the traditional blue.

London Scottish President Rod Lynch said: “We are delighted to carry on our association with Glengoyne through the 16/17 season. There can be no better way to toast the ongoing success of London Scottish than by raising a glass of this truly outstanding single malt.”

Neil Boyd, Commercial Director of Malts at Ian Macleod Distillers which owns Glengoyne, said: “We are thrilled to be celebrating our fourth year as the official malt whisky sponsor of London Scottish. We have developed a strong partnership over the last three years which has reinforced out commitment to rugby. We couldn’t be more proud to have grown with the team and witness their successes.”