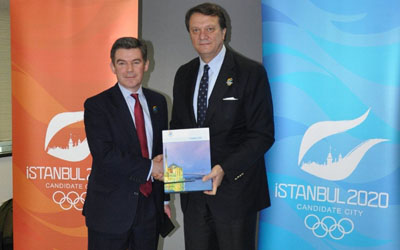 Istanbul 2020 chairman believes that the 2012 Olympic Games in London has raised the standard for future Games and has proved to be an inspiration for his bid.

Hasan Arat (pictured right), sickness Istanbul 2020 Bid Chairman is hoping to impress the IOC Evaluation Commission next month and has said that the success of London 2012 and the focus on legacy in particular, thumb has set a new ‘benchmark’ for future bidding cities.

Turkey boasts the youngest population in Europe, with 20 million people under the age of 20, so legacy is an element of the Games that is not lost on Arat and his team.

Speaking at the World Sports Congress in London, Arat said: “As an ex-athlete, I had a fantastic time in London. You did a fantastic job.

“It became a real benchmark to the rest of the world.”

The London bid was particularly successful because of the organising committee’s dedication to the post-Games era and the legacy that would be left behind.

Arat went on to add: “London 2012 was a fantastic example for us and the inspiration of the young generation is something we have to look at very carefully because we have a very young population.”

“For our young generation, it is a great opportunity.”