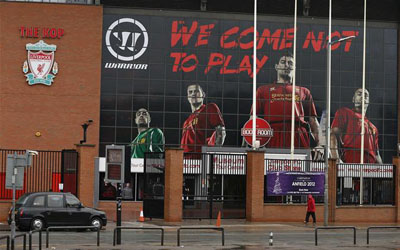 Liverpool are set to redevelop Anfield into a 60,000 stadium instead of building a new stadium, managing director Ian Ayre has revealed.

Ayre made the announcement at Liverpool Town Hall, with the city’s local authority revealing plans to regenerate the area around the stadium.

Liverpool City Council has secured a £25 million grant from the government for the Anfield Village project, with the Your Housing housing association also set to invest.

The council plans to demolish a number of homes near Anfield as part of the development, using compulsory purchase orders where necessary, which will create space for the expansion of the stadium.

“Today represents a huge step forward for the Anfield area,” Ayre said. “Everyone at the football club knows the importance of today.

“We welcome the opportunity to be part of this partnership. We want to thank Joe Anderson [the Mayor of Liverpool] and the council for the time and the support they’ve given us to help make the right decision.

“Liverpool celebrated its 120th year in 2012 at Anfield, and there is no doubt Anfield is the spiritual home of the club – our preference was always to remain at Anfield.

“This is a major step forward for the football club but also, more importantly, the residents. It is step one as there is land to acquire and plans to be approved, but this is a significant moment.

“Questions about capacity and cost are not for today – not until we have certainty.”

Ayre, who also indicated that the blueprint for redeveloping the ground was likely to include extending the Anfield Road and main stands, made the announcement on the second anniversary of Fenway Sports Group’s takeover of Liverpool.

Principal owner John W Henry has hinted strongly in the past that he wanted to keep the club at Anfield, despite the fact that the club have had plans to build a new stadium on neighbouring Stanley Park since 2000.

The cost of redeveloping Anfield has been estimated at around £150 million, roughly half what it would have cost to build on Stanley Park.

Ayre has always maintained that, even with a naming rights deal, moving did not make financial sense, which is why Henry has always preferred the idea of staying put.

The managing director told Liverpool’s website: “I think we would all hope to do it [redeveloping the ground] as soon as possible, but there are determining factors we don’t know the answer to yet.

“The acquisition of land and property and the planning processes are exactly that – processes – and they are undeterminable at this stage.

“We start that in earnest today, so it’s too early to say the time or the dates.

“As we unfold the plan and as the plan develops, we will use all the normal channels to let our fans know and keep them informed. We are all excited about it, and hopefully it’s a great opportunity for the club.”

Liverpool Mayor Joe Anderson commented: “We believe this to be an exciting opportunity for Liverpool, the area of Anfield and, of course, Liverpool Football Club.

“It’s been something we’ve been looking forward to for a number of months as we got close to finalising arrangements of the partnerships with Your Housing and Liverpool Football Club.

Michael Cunnah, former Wembley CEO, told iSportconnect: “The simple answer is that they have been unable to work out an affordable solution. The problem is that when you already have a stadium, the financial return from a new stadium sometimes looks unexciting, as accountants will perform the calculation by comparing the full cost of the stadium with the incremental revenues over and above what the current stadium generates. For a build cost of (say) £400m Liverpool have perhaps been looking at additional annual revenues of perhaps £30m – £50m. With debt service costs (at say 8%) of £32m p.a. you can see that Liverpool’s financial future doesn’t look much different, except a significant increase in risk!

“I suspect that the refurbished Anfield may not be as big as 60,000, in fact it may not be much bigger at all. However I do expect the stadium to be upgraded and have a big increase in the number of higher priced seats and hospitality. If LFC can perform their stadium upgrade for £150m it will incur debt service costs of £12m p.a.. If they have (say) 10,000 new hospitality / executive seats seats for 25 matches per year then any revenue above £48 per seat per match generates a profit on the investment.

“This seems to be more in line with LFC’s thinking, however the problem is that modifying the existing stadium still leaves you with an old stadium. They have to be careful that natural decline and decay doesn’t result in big repair bills in the future which will have no pay back as they will be pure maintenance. Remember, an old house costs a lot more than a new house to maintain!”