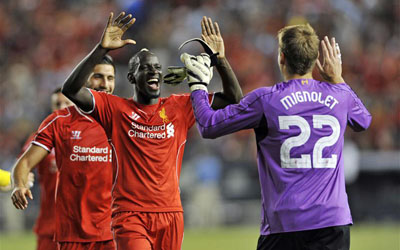 The website will co-exist with the club’s official website, Liverpoolfc.com and will provide fans from across the world with daily news, features, videos and quizzes that have been specifically tailored for an audience that wants to consume content quickly and on-the-go.

Fully mobile and tablet responsive, LFC Xtra will deliver Liverpool FC content to fans in a unique and visual way.

Paul Rogers, head of international development at Liverpool FC, said: “The club has millions of fans all over the world and, following extensive research, we’ve created a website that aims to deliver a content experience that’s very engaging, localised and easy to consume on-the-go.

“We wanted to create an online experience that’s different from what any other club in the world has done with content and doesn’t take itself too seriously.

“LFC Xtra will act as a bridge between what fans currently consume in bite-size chunks on social media and the more comprehensive content offered by the official website.”

Matthew Baxter, chief media officer at Liverpool FC, commented: “Today’s launch of the LFC Xtra website is the latest development in the roll-out of the club’s international media strategy.

“Since November 2012, Liverpool FC has launched more international and localised social media accounts than any other football club in the world and we now deliver content in 20 different languages every day.

“With the launch of official websites in Thailand, Indonesia and China and new LFCTV shows being broadcast in more countries than ever before and now available in HD, there’s never been more official Liverpool FC content for fans to consume on different platforms.”