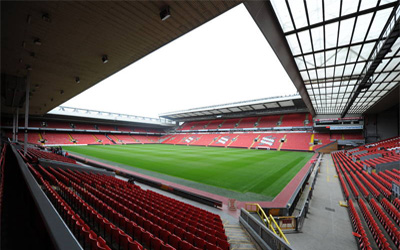 Liverpool have submitted a formal planning application to extend the capacity of Anfield.

The £100m project would see a third tier added to the Main Stand, raising the ground’s capacity to about 54,000.

A second phase could later redevelop the Anfield Road Stand, further increasing the capacity to 58,800.

If permission is granted, work on the Main Stand could be completed in time for the 2016/17 season.

The application follows a large public consultation and will be considered by the Liverpool City Council’s planning committee later this year.

The submission of the application follows a major public consultation in which the overwhelming majority of local residents, businesses and fans backed the proposals.

The document submitted to Liverpool City Council today applies for detailed planning consent to expand the Main Stand and outline consent for the expansion of its Anfield Road stand.

The application is expected to be considered by the city’s planning committee later this year.

Incorporating the iconic club crest into the proposed Main Stand’s exterior elevation, the scheme would also include a two-storey podium and a carefully designed cloister which would become the new home for the Hillsborough Memorial.

The Main Stand would open onto a wide public space which has been designed to link the stadium and park while creating an area which is relevant and usable to the local community, particularly on non-matchdays.

As part of its proposed stadium expansion plans, the club has also appointed Tom Doyle, an experienced project director who worked on the London 2012 Olympic programme and more recently the SSE Hydro Arena in Glasgow, to manage the redevelopment should consent be granted.

Chief Executive Ian Ayre said: “When we set out on the journey to explore the feasibility of expanding the stadium, we said the process would be determined by certainty.

“Certainty that we have the support from local residents and businesses for our proposed plans, that we can acquire the land required and that we can navigate the planning landscape.

“We have worked closely with the community, local residents, Liverpool City Council and Your Housing Group and we are delighted to be able to bring forward a planning application at this stage.”

Mayor of Liverpool Joe Anderson said: “The proposed redevelopment of the stadium is a hugely important part of our vision for Anfield – to create a thriving community in which people want to live, work and visit.”