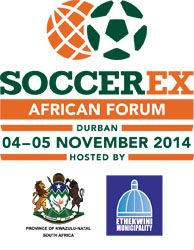 Next week’s Soccerex African Forum will feature a press conference involving Liverpool FC and Hoy Park Management that will announce the new venture agreed by the two organisations which aims to increase the development of grassroots football in KwaZulu-Natal.

The press conference will be taking place on the second day of the event being held at the Moses Mabhida Stadium, unhealthy 4-5 November, healing with CEO of SAFA’s Development Agency Dr. Robin Peterson also set to deliver a presentation on SAFA’s vision for 2022 on the opening day of the forum.

The venture will see official Liverpool coaches teaching local children between the ages of 5 and 14, the necessary skills to improve both their technical, tactical and physical ability as well as educating the youngsters on what it takes to develop these skills alongside the social demands of the game.

A coach-education scheme will also ensure that local trainers can benefit from the initiative and help create a sustainable football community across the KwaZulu-Natal and Gauteng provinces.

White, who has overseen the creation of soccer schools in India, China and the USA over the last year, has considerable experience in the orchestration of soccer academies and has previously held positions at Fulham FC and Manchester United.

Moogan, like White, has been instrumental in the establishment of Liverpool Academies worldwide.

Having attended the Liverpool FC Academy as a youngster, Moorgan’s career was cut short through injury; however he joined Liverpool in 2009 and in his role as International Academies Programme Manager is responsible for the implementation and development of existing and new coaching programmes that are taught in Liverpool’s international academies.

Cardoso is the man credited for nurturing the talents of players such as Cristiano Ronaldo, Luis Nani and Eric Dier at Sporting Lisbon and is regarded as one of the most influential figures in player development.

Soccerex CEO Duncan Revie commented: “Given the global nature of the game some of Europe’s top clubs are keen to explore player development across the world. The project involving Liverpool FC and Hoy Park Management looks to be a very exciting one and we are delighted that our African forum will host the start of a new adventure for both parties.”

The Soccerex African Forum will bring together 1,000 senior football decision makers together with businesses from across the continent and the world for two days of unrivalled learning, networking and business opportunities to unite the business of football in Africa. You can find more information by visiting our website at http://www.soccerex.com/africa or calling us on +44 (0)208 987 5522.