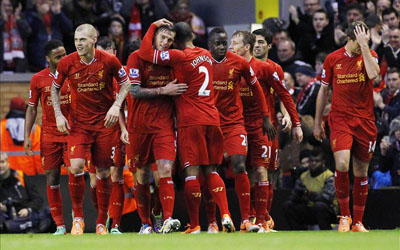 Liverpool have become the first Premier League club to join Fancred one of the fastest growing sports social media networks in the United States.

Fancred, a sports social media network, has  membership growing by 100 per cent month-over-month, Fancred aims to be the go-to place for sports followers, commentators, teams and clubs to share sports-related news, opinions and content.

From today, Reds fans from across the world will be able to follow the club’s official account on Fancred, which will see LFC posting exclusive content on the mobile app.

Hossein Kash Razzaghi, Fancred CEO, said: “Our mission at Fancred is to unite the world’s sports fans. We are beyond thrilled to welcome Liverpool, a world-class sports organisation with passionate supporters in every corner of the globe.

“The sports-only focus of the Fancred social network will provide Liverpool fans a unique environment to better connect with the team and fellow fans around the world.”

Matthew Baxter, chief media officer at Liverpool FC, said: “Fancred is rapidly becoming the first stop for sports fans to share opinions, content and views on sports clubs from around the globe.

“As part of the club’s strategy to bring Anfield closer to fans, we have signed up to Fancred as the next step in our digital strategy. Users of the app can expect to see exclusive club content and the latest news and views.”

Liverpool FC has more than 23 million engaged social media followers across the world.