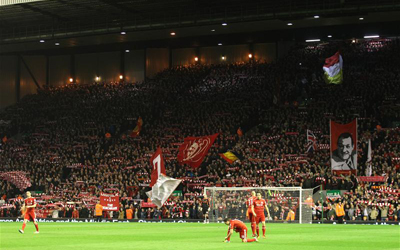 Liverpool Football Club are to introduce a new six-tier ticket structure in the 2013-14 season, to provide a more accurate price for the seat, location and pitch view.

The move will see some prices reduced, whilst the Kop end will remain the same or be reduced as well.

Ticket prices for juniors will be available from £5 for some League games, after the club trialed this approach in cup games.

Liverpool are trying to attract more children and younger fans and the family area at Anfield saw ticket prices for fans under 16 reduced by 30%.

Ian Ayre, Liverpool Managing Director, said: “Over the past two years, the club has given careful consideration to ticket prices and pricing structures in consultation with the Supporters Committee.

“Following last year’s price freeze, this year we have reviewed our overall stadium pricing structure and, similar to many other Premier League clubs, from next season we will also be introducing a multiple-tier pricing structure which will more accurately reflect seat location and view.  This new approach to ticket price points at Anfield will see all Kop tickets reduce or remain flat in price for the second year in succession.”

He added: “As part of our planned approach to making Anfield more accessible to families, earlier this season we invested over £1million in a new Family Zone area and Family Park at Anfield.  These areas were designed to keep junior Reds entertained before and after the match and it’s great to see so many kids enjoying the new spaces we have created for them.

“We will be introducing a number of junior ticket price points to make Anfield more affordable for families including a new low £5 children’s ticket for selected Premier League games.  We hope that by reducing junior pricing and making more tickets available, we’ll see even more of our youngest fans at Anfield.”

Away tickets will also be reduced or remain the same for the majority of games.