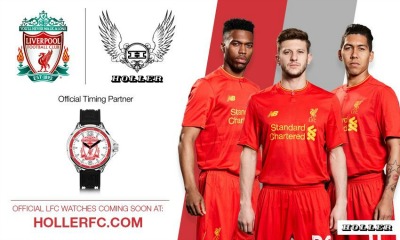 The three-year deal will see Holler produce a range of LFC watches, the first of which is due to launch in late 2016 and will be available to purchase from official Reds stores as well as the online store.

Holler will also benefit from digital and social media support as well as access to first-team players and legends in order to promote their range of Liverpool FC watches.

Billy Hogan, the club’s chief commercial officer, said: “It is great to welcome Holler to the LFC family. We’re delighted we can work together to bring new ways for fans to wear their pride for the club.

“Holler is an exciting brand and we very much look forward to working together on this partnership.”

Darren McCormick, managing director of DMJ, said: “Holler is very proud to be the official timing partner of one of the most successful football clubs in the United Kingdom.

“We want to create a watch for the real fans. We want to give the fans a Liverpool FC watch they can wear with pride.”