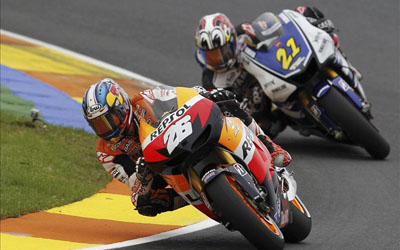 Dorna Sports, medstore the commercial rights holders and organisers of the FIM MotoGP World Championship, have announced that lubricant manufacturer LIQUI MOLY will become the Official Oil Supplier for both Moto2 and Moto3 in 2015.

As of the forthcoming season all of the teams in both categories will be using the motor oil for Grand Prix racing.

As part of the deal the LIQUI MOLY brand will be advertised prominently at race tracks throughout the 2015 FIM MotoGP World Championship via trackside advertising.

Pau Serracanta, Managing Director, Commercial Area at Dorna Sports, said: “We are pleased to welcome LIQUI MOLY into Moto2 and Moto3 as the Official Oil Supplier. The quality and performance of their products makes them a fitting partner to the World Championship.

“These agreements will raise their brand recognition amongst the 2,4 million motor sports fans who make the pilgrimage to races each year, in addition to the hundreds of millions of television viewers who watch MotoGP every race weekend.”

Peter Baumann, Head of Marketing at LIQUI MOLY, said: “This is a great distinction for us, that the World Championship have selected us as their exclusive Moto2 and Moto3 Oil Supplier.

“We will work together with the teams to further improve our formulation and we know that oil performance proven in racing also delivers the highest performance on the road. We want to make this uncompromising performance available to every motorcyclist.

“We are also excited about the opportunity to advertise LIQUI MOLY at race tracks. This will put our brand in the media at 18 races every year, which will be a tremendous boost for international familiarity with our products.”