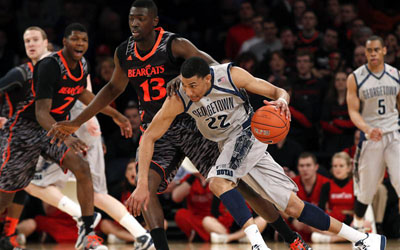 LG Electronics USA has expanded its partnership with the National Collegiate Athletic Association (NCAA) as an official NCAA Corporate Partner, gearing up to take over Atlanta through a series of immersive activities and initiatives for basketball fans at the 2013 NCAA Men’s Final Four, April 6-8.

LG is inviting fans to “Do March Right” all month long during the tournament’s 75th celebration — from hosting tips for the ultimate game-viewing gathering, to testing historical sports knowledge with trivia from 75 years of the Big Dance, to calling for the best game-time recipes — all for a chance to win a trip to the Final Four.

“Just as LG is passionate about technology, college basketball fans are passionate about their schools and teams.  So joining forces with the NCAA is a natural fit for LG, combining fans’ love of the game with their love of the ultimate game day experience,” said James Fishler , senior vice president, marketing, LG Electronics USA.

“Through our NCAA partnership,” Fishler added, “LG is able to show how our innovative technologies and designs can help fans experience all the excitement and action of the NCAA tournament right in their own home, even if they can’t be courtside inAtlanta during Final Four weekend. We’re thrilled to build on our partnership with the NCAA for the 2013 tournament, particularly this year during the NCAA Tournament’s 75th celebration.”

CBS Sports analyst and former NCAA champion Greg Anthony will be returning this year as the face of LG’s Do March Right national advertising and marketing campaign, encouraging fans to join the debate online about game day food at LG.com/NCAA.

The 2013 Men’s Final Four marks LG’s fourth as an official NCAA Corporate Partner. In 2012, LG extended its original three-year alliance with the NCAA through a new, multi-year agreement running through August 2015. Under its new agreement, negotiated with CBS Sports and Turner Sports , LG will continue as an official NCAA Corporate Partner and have exclusive category marketing and promotional rights related to all 89 NCAA championship events across 23 different sports, including the NCAA Division I Men’s Basketball Championship and NCAA Football Championships.

“LG will have a greater presence this year at the Men’s Final Four in Atlanta, which is an indication of its growing support of NCAA student-athletes and our Association,” said Keith Martin , managing director of championships and alliances.  “Fans will get several opportunities to see the strong LG brand and to participate in their fun and interesting activities during March Madness and in Atlanta.”