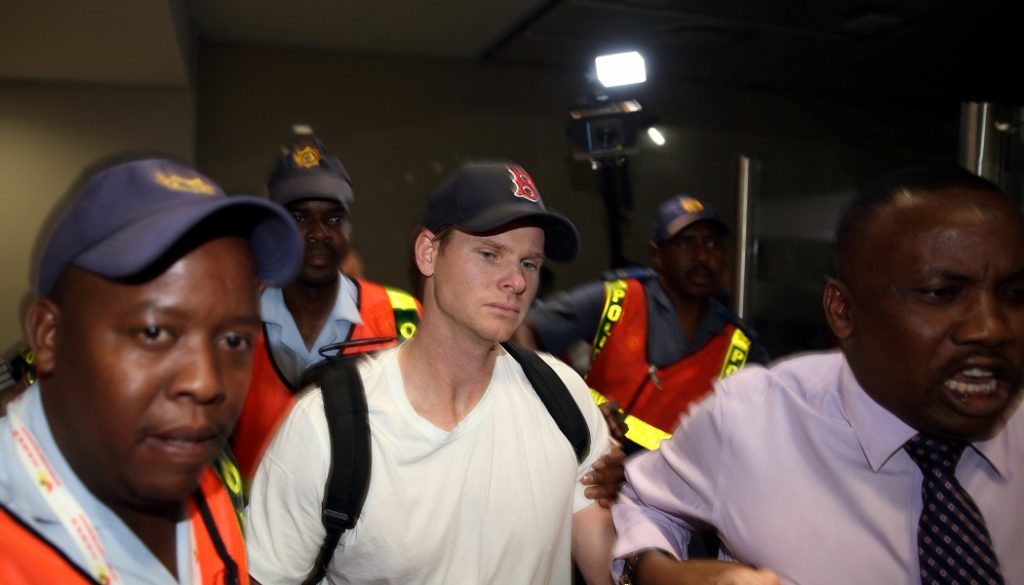 The scandal that has engulfed Australia in recent days doesn’t involve the publication of national security secrets on Facebook; a new international report on Australia’s treatment of refugees; or an attempted foreign takeover of a major Australian energy provider. Nor does the scandal involve the substitution of test samples for doping from top athletes – instead, the scandal involves tampering with the ball in a cricket match against South Africa.

While most incidents of cheating in sport are usually confined to local athletes, teams and sports governing bodies, the cricket ball tampering affair has gripped Australia like no other in recent times, also creating international headlines because of the Australia’s reputation as one of the world’s most successful, admired and credible sporting nations.

While the scandal marks another new low in sport, it also demonstrates the huge impact sport corruption can have on a country, and provides important lessons in understanding and dealing with corruption and cheating in sport.

The Australian cricket crisis has rapidly become a national obsession and subject of international interest and intrigue, due in part also to the old world romanticism surrounding cricket as a sport based on principles of fair play. Ball tampering is just not cricket.

Cricket appeals to the masses, and to princes and prime ministers alike, with generations of political leaders, including former Australian Prime Ministers Bob Hawke and John Howard, along with British PMs including John Major, and current leader Theresa May, who has urged cricket officials to repair the damage caused by the ball tampering scandal to cricket’s image as soon as possible.

The scandal has clean bowled Australia’s confidence in sport, with current Prime Minister Malcolm Turnbull leading a national chorus of condemnation against the ball tampering plot, describing the incident as an affront to Australia and its values, and calling also for other cricket dark arts to be abandoned, especially sledging, which involves verbally attacking and distracting opponents on the cricket field.

Events on the sporting field and battlefield have come to define Australia society and values, which helps to explain why the plot to apply sandpaper to the cricket ball to make it more difficult for opposition batsmen or strikers to hit the ball has taken on almost existential overtones for this sports obsessed nation.

Sport has been a pillar of Australia’s development as a modern, progressive nation from a settlement of convicts dispatched from the British Isles, who later excelled in many of the sports that were invented and codified in England and later exported to the vast corners of the British empire, including cricket.

Like America’s pastime, baseball, with which cricket shares many cross over skills as one of the world’s popular bat and ball sports, cricket is also one of Australia’s favourite past times, spanning the social spectrum – from beach and backyard settings to inner city lane ways, local parks, and indoor centres, and fills world famous venues such as the 100,000 seat Melbourne Cricket Ground, in the Australian state of Victoria, one of the biggest sports stadiums in the world and venue for the 1956 Melbourne Olympic Games.

Sport has also played a critical role in building Australia’s international image, with national Olympic delegations and cricket teams in particular capturing much admiration abroad as well as at home, and acting as athlete foreign ambassadors for Australia while on tour.

When South Africa’s late great human rights champion and Nobel laureate, Nelson Mandela, was released from prison, one of the first questions he asked was whether Australia’s legendary cricketer, Sir Donald Bradman, who notched up a near perfect and still unmatched record test batting average of 99.94 runs, was still alive.

With trust in sport at an all time low globally, the fall out from Australia’s cricket scandal has important implications for the IOC, WADA, FIFA, IAAF, UCI and other world governing bodies, agencies and federations.

These include the need to better understand and anticipate the changing sports landscape and priorities of key stakeholders – especially the public, commercial partners, young people, media and governments – increasingly the primary funders of major sporting events – who are seeking and expecting a swifter, and more decisive and urgent ‘zero tolerance’ approach to sports corruption.

If the Sydney 2000 Olympic Games was the high point of Australia’s sporting achievements to date, the ball tampering affair is the nadir for the powerful sporting nation.

While Australia’s Olympic success has diminished somewhat in recent years, the national cricket team has continued to keep the Australian flag flying high on the world sports stage – Australia has featured in 6 of 9 World Cup finals, including the last four in a row, and is current world champion.

The ball tampering scandal however has shaken the country’s sense of identity and place in the world as a nation that has long believed in a fair go for all on and off the sporting field.

With a number leading national Olympic committees reviewing the culture of their organisations while addressing a range of controversies including doping, work place bullying, and sexual abuse of athletes, issues within the culture of Australian cricket have been linked to the ball tampering conspiracy.

While many Australians would still be proud to wear the national team’s signature baggy green cricket cap, the public’s affection for its beloved national cricket team has waned in recent times, with fans increasingly disillusioned by a ruthless ‘win at all costs’ culture that has taken hold within the team as evidenced by the ball tampering scandal.

The annual multi million dollar contracts and glamorous lifestyles with luxury trappings afforded from representing Australia have also alienated fans from cricket stars placing themselves on their own pedestals, increasingly out of touch with the public on whom the game and their careers ultimately depend.

Australian cricket officials have also been heavily criticised for allowing an aggressive, arrogant and elitist culture to develop within the team environment that does not represents the values of Australian sport and society.

Cricket officials have also been heavily criticised for being too slow to understand and respond to the deep anger and fury of the public and country to the incident, prompting sponsors to cancel multi million dollar contracts.

Similarly, perhaps, while concerns and criticism have been made in relation to perceived delays in suspending Russia from Olympic competition following the discovery a massive secret doping operation involving government facilities and officials, the Olympic Movement needs to find better ways to communicate the due process involved in national Olympic committee suspensions to sports audiences unfamiliar with the subtleties of international sports federation protocols and procedures, which cannot be adequately conveyed in headline news bulletins.

New campaigns reinforcing the tradition values of sport to global audiences will also help to provide a more receptive and responsive environment for swifter and more decisive penalties for athletes, teams and countries that engage in sports corruption.

Michael Pirrie is a London based major events communications strategy consultant and commentator on Olympic and world news.