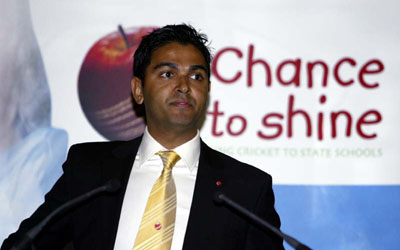 Leicestershire County Cricket Club have appointed Wasim Khan as its new chief executive officer becoming the first British asian to take on the coveted role in the County Championship.

The beleaguered county side, who have not won an LV= County Championship match in two seasons, will hope Wasim can bring the success he has enjoyed on and off the field with him to Grace Road when he takes up his post in January.

In his various cricket administration roles, the 43-year-old has been heavily involved in working with the local community and Leicestershire will be keen for that to continue, particularly in the region’s Asian community, in order to boost interest in the club.

“It is a tremendous honour to be appointed as chief executive officer of Leicestershire County Cricket Club,” Wasim, who was awarded an MBE last year for his services to cricket and the community, said.

“I am really looking forward to working with all of the staff and the board because I know there are terrific people at Grace Road. It is an exciting opportunity for me.

“I remember playing at Grace Road in the past and the club has always been extremely well supported by its members and supporters. I thoroughly enjoyed my time in cricket as a player and it has been fantastic to continue working within the game I love.”

Wasim, the former Warwickshire, Sussex and Derbyshire opening batsman, has proven his credentials since retiring from first-class cricket in 2001 by running several hugely popular programmes, including the Chance to Shine scheme in his role as chief executive of The Cricket Foundation.

Leicestershire chairman Paul Haywood said: “We are delighted to welcome Wasim to Grace Road. The process of appointing our new chief executive has been a rigorous one and there were a high number of quality applicants.

“Wasim impressed the interview panel with his vision for the future, his passion for the game and his track record both in cricket and cricket administration.”

Wasim replaces Mike Siddall, who left his post at the end of the season after four years in the position.