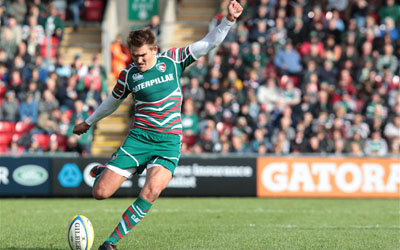 Leicester Tigers chairman Peter Tom CBE says the club is surprised and disappointed by the decision not to include Welford Road among potential venues for the Rugby World Cup in England in 2015.

Mr Tom said: “We are hugely disappointed to learn that Welford Road will not play a part in England’s hosting of the Rugby World Cup in 2015.

“When the International Rugby Board awarded the Rugby World Cup to the country that gave this sport to the world we saw this as an opportunity to celebrate the international game and also the professional club game here. Leicester Tigers wanted to be part of that.

“Welford Road has hosted many, many major occasions over the years, including visits from South Africa, Australia and Argentina national teams in recent seasons. It is home to the best-supported and most successful club in the history of the professional game in this country and, as such, we believe is worthy of Rugby World Cup status.

“Leicester Tigers has always been a forward-thinking and progressive club, and has played an important role in the development and promotion of the game in this country. Who can forget that both head coach and captain of England’s World Cup-winning team in 2003, and several other members of the squad and backroom staff, spent major parts of their own careers in Leicester colours? The current England squad also contains a sizeable number of Leicester players, many of whom have been introduced to the sport as fans at Welford Road and have come through the club’s Academy structure to first-team and then international honours.
“It is that kind of heritage and dedication to the development of the game that makes the name of Leicester Tigers and Welford Road stadium known throughout the rugby-playing world.

“Welford Road is the largest designated club rugby stadium in England, an iconic home of the sport in this country and home to the most successful club in the history of a thriving, competitive and successful league structure yet it will not be at the table when it comes to hosting a global rugby event in this country.

“That the organisers of RWC2015 do not think this an appropriate venue for its fixtures is disappointing and confusing both for the professional club game in this country and for its supporters.

“Leicester Tigers has the largest community of rugby supporters of any club in the country and the club invested £15million in building the new Caterpillar Stand in 2009 to take Welford Road’s capacity up to 24,000. A programme of development will continue to improve facilities and the matchday experience for players, supporters and corporate guests. It is disappointing that this investment is not rewarded with World Cup status while many other venues on the proposed list do not show that level of commitment to our sport.

“We wish all of the Leicester Tigers players who will be representing their national teams at RWC2015 every success in it.”

The long list of venues selected by ER 2015 and approved by the RWCL Board is as follows:

Michael Cunnah, the former Wembley CEO, told iSportconnect exclusively: “The selection of grounds is very interesting. Football stadia are usually bigger than Rugby stadia and therefore will potentially generate more revenue for the IRB.  Revenue generation seems to be more important than rugby heritage. Some of the stadia that have been named are not in Rugby “heartlands” and it will be interesting to see whether they will sell out.”

“Wembley Stadium is very attractive to RWC 2015 as its sheer size and corporate facilities will generate huge amounts of money for the organisers. You should expect to see the biggest matches, probably featuring southern hemisphere teams, being staged there.”
Martin Perry, the executive director of Brighton & Hove Albion was ecstatic with Amex being included in the list.

“This is fantastic news, and further evidence that the stadium is a world class venue, attracting interest on an international scale,” he told iSportconnect.

“It is a terrific opportunity for our wonderful stadium and the city of Brighton & Hove. If we are fortunate to be selected, it would bring thousands of visitors to Sussex, while the television coverage would mean the eyes of the world would be upon us.”

Andy Cosslett, England Rugby 2015 Chairman, commented: “The selection of the long list of potential venues represents an exciting milestone for Rugby World Cup 2015, when fans up and down the country can begin to get excited about the prospect of one of sport’s greatest events coming to their local city or town.”

“Our vision for Rugby World Cup 2015 is to ensure that we take this prestigious tournament to as many parts of the country as possible and we believe that the geographical spread of venues selected will enable us to maximise the reach of the tournament. In addition, we will be selecting further venues for training and team base camps that will ensure that the rugby community is at the very heart of Rugby World Cup 2015.”

“We will now continue to work extremely closely with the venues, cities and stakeholders, including the Premier League and Football League, to plan the scheduling of matches and city hosting programmes to select a final list of up to 12 venues, which will be agreed by the early part of next year.”

“We are confident that with the venues selected we will be able to reach our target of having up to 2.9 million tickets available, opening up the tournament to more people than ever before and in turn delivering the biggest and best Rugby World Cup that there has ever been.”

“The process of choosing the long list of venues was very competitive and we would like to thank the venues and cities who we have met for their full co-operation, including the venues not selected, all of whom provided us with their fulsome assistance and information required to make our selection.”